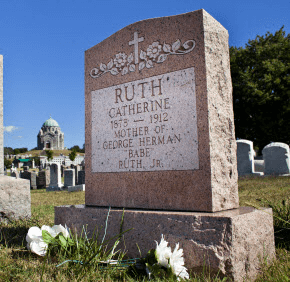 By George P. Matysek Jr.
gmatysek@CatholicReview.org
Founders of religious communities, prominent lay Catholics, philanthropists and church leaders are among the many Catholics whose final resting places are located within the Archdiocese of Baltimore.
Many know that Archbishop John Carroll, the first Catholic bishop in the United States, is entombed beside other bishops in the crypt at the Basilica of the National Shrine of the Assumption of the Blessed Virgin Mary in Baltimore. The Cathedral of Mary Our Queen in Homeland is the final resting place for spiritual shepherds including Cardinal Lawrence Shehan and Archbishop William D. Borders.
There are also lesser-known Catholics who have made an impact throughout the generations and whose tombs may be visited by the public.
In anticipation of All Souls’ Day, Nov. 2, the Catholic Review takes a walk through some of the area cemeteries and places of worship.
Catherine Ruth
For nearly a century, the earthly remains of the mother of baseball’s most famous player rested in an unmarked grave at Most Holy Redeemer Cemetery in Baltimore.
Catherine Ruth, mother of George Herman “Babe” Ruth Jr., finally received her due in 2008, when a headstone was erected with the financial support of the Babe Ruth Museum in Baltimore.
Born in 1873, Catherine Ruth was the mother of seven children – only two of whom survived. According to research completed by Paul Harris Sr., a local author and Ruth expert, she had Babe Ruth baptized at St. Peter the Apostle in Baltimore. The troublesome child was later admitted to St. Mary’s Industrial School as an “incorrigible,” and was again baptized in 1906.
Babe’s mother died on Aug. 11, 1912. Harris was the driving force behind erecting a gravestone in her honor.
Henry Gunther
One minute before the 11th hour of the 11th day of the 11th month of 1918 – the moment when an armistice took effect to end World War I – Henry Gunther was shot and killed near the French village of Chaumont-devant-Damvillers. The 23-year-old infantryman and parishioner of Sacred Heart of Jesus in Highlandtown became the last casualty of World War I, receiving the Distinguished Service Cross posthumously.

(Photo by Tom McCarthy Jr. | CR Staff)
Gunther’s remains were returned to Baltimore in 1923, and he was buried at Most Holy Redeemer Cemetery. A memorial plaque citing him as the last casualty of the war was erected Nov. 11, 2010.
Mother M. Demetrias Cunningham
Born in 1859, Mary Frances Cunningham was an active parishioner of St. Martin in West Baltimore during the 1880s. Concerned about providing religious instruction to African-American children, she established a Sunday school for them at her church. She soon began working with other women as part of an outreach called the St. Joseph’s Guild. With the permission of Cardinal James Gibbons, and despite the opposition of her pastor, she established the Mission Helpers of the Sacred Heart in 1890, becoming Mother Demetrias. Her religious community grew, pioneering what became known as the “adaptive way” of sharing the faith.
Mother Demetrias died April 9, 1940. She is buried at the Mission Helpers motherhouse in Towson.
Redemptorist Father Thaddeus Anwander
Considered the “second founder” of the Baltimore-based Oblate Sisters of Providence, Redemptorist Father Thaddeus Anwander was a strong supporter of the first religious community for African-American women. During his time as ecclesiastical director of the women’s community, he helped ensure the Oblates’ financial stability. Father Anwander died in 1893, and is buried at Sacred Heart of Jesus Cemetery, Dundalk.
Thomas O’Neill
Born in Ireland in 1849, Thomas O’Neill became a prominent Baltimore businessman. As the Great Baltimore Fire of 1904 approached his dry goods store, it is said that O’Neill raced to a Carmelite monastery to ask religious sisters for their prayers. The fire stopped short of O’Neill’s business, saving him from financial catastrophe. In thanksgiving,

O’Neill left part of his fortune to build what would become the Cathedral of Mary Our Queen and Good Samaritan Hospital in Baltimore. He also gave a grant to what was then Loyola College. He died in 1919 just hours after attending Palm Sunday Mass at Corpus Christi in Baltimore. He is buried at the New Cathedral Cemetery in West Baltimore.
Roger Brooke Taney
The first Catholic member of the Supreme Court and the fifth chief justice, Roger Brooke Taney was the author of the notorious 1857 Dred Scott v. Sanford decision that declared blacks to be noncitizens and that made slavery legal in all territories. Leading the court from 1836 to 1864, Taney lived many years in Frederick County, where he was a member of St. John Parish in the city of Frederick.
The chief justice, also a former Maryland attorney general, U.S. attorney general and U.S. treasury secretary, was a close friend of Father John DuBois, a former pastor of St. John and founder of what today is Mount St. Mary’s University in Emmitsburg.
Taney, who was instrumental in supporting a public lottery that raised money to build St. John Church, died in 1864 and is buried in his parish’s cemetery.
Mother Mary Lange
Believed to be of Haitian descent, Mary Elizabeth Lange arrived in Baltimore as a refugee from Cuba around 1812. She established St. Frances Academy in Baltimore in 1828 to educate black children in an era of slavery, founding the Oblate Sisters of Providence in 1829 as the first religious community for African-American women. Members of her order would later staff other schools around the country and other parts of the world.

Mother Lange died in 1882. Her cause for canonization is now under consideration in Rome, and her remains were recently transferred from New Cathedral Cemetery in Baltimore to her religious community’s motherhouse in Arbutus.
St. Elizabeth Ann Seton
Canonized by Pope Paul VI on Sept. 14, 1975, St. Elizabeth Ann Seton was the first American-born saint. A widow and mother of five children, she converted to the Catholic faith following her husband’s death in 1803.
Archbishop John Carroll invited her to Baltimore to serve as a school mistress. She took her first religious vows at St. Mary’s Seminary in March 1809 and in the summer of that year moved with a small band of sisters to Emmitsburg. During this time she began the Sisters of Charity of St. Joseph, modeling her order on the Daughters of Charity of St. Vincent de Paul in Paris.
St. Elizabeth Ann established St. Joseph’s Academy and Free School, the first free Catholic school for girls staffed by sisters in the United States. Many trace the modern Catholic school system in America to St. Elizabeth Ann’s Emmitsburg institution.
St. Elizabeth Ann died in 1821. Her remains are entombed at the Basilica of the National Shrine of St. Elizabeth Ann Seton in Emmitsburg.
Also see:
Lennon returns to Baltimore’s Mercy High as its next president
PrevNext