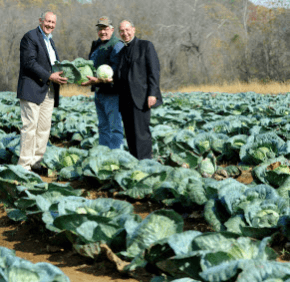 By Elizabeth Lowe
Elowe@CatholicReview.org
Twitter: @ReviewLowe
SPARKS – Roughly 200,000 pounds of potatoes have been donated this year – all from a northern Baltimore County farm – to help feed thousands of hungry Marylanders.
While potatoes comprise the majority of the 300,000 pounds of food grown, harvested and donated this year to Catholic Charities’ Our Daily Bread in Baltimore and the Maryland Food Bank, among other organizations, they aren’t the only crop on the sprawling Baltimore County farm.
The Archdiocese of Baltimore, which owns farmland across York Road from the Monsignor O’Dwyer Retreat House, has partnered with First Fruits Farm, Inc., a Freeland-based Christian nonprofit that works to feed the hungry. Together, these organizations are working to grow food for the hungry on the 205-acre farm.
Eighty-five of the farm’s 205 acres are tillable, and 25 of the 85 acres are currently being used, said Rick Bernstein, who founded First Fruits as a nonprofit in 2003 with his wife, Carol.
First Fruits’ origins extend to 1993, when it began as a family and church ministry. Since the partnership began with the archdiocese, it has donated seeds, fertilizer, equipment and money to the Sparks farm, Bernstein said. For the past 10 years, First Fruits has been growing, harvesting and donating fruits and vegetables to dozens of organizations in need, including Our Daily Bread.
Last year, the nonprofit donated more than 1.2 million pounds of fruits and vegetables to area organizations.
“It’s a work of God,” Bernstein said. “God took a yearning and made it into a ministry.”
Since April, food from the Sparks farm – which, in addition to potatoes, includes cabbage, pumpkins, corn, zucchini and green beans – has been donated, Bernstein said.
“It (the donation) saves us from buying vegetables,” said Kim Kahl, volunteer manager at Our Daily Bread. “This is a big, wonderful thing.”
On Oct. 30, Archbishop William E. Lori slipped on galoshes and toured the property. He spent time in the cabbage patch.
“It’s a wonderful partnership between First Fruits Farm and the efforts of so many parishes and Catholic Charities,” Archbishop Lori said.
More than 3,000 people and 100 different groups volunteer annually at the Freeland and Sparks farms, Bernstein said.
“The Lord,” said Dan Millender, First Fruits’ vice president of operations, “provides for it all.”
Did you know?
Archbishop Lori’s favorite vegetable is Brussels sprouts, followed by cauliflower.
By the numbers:
300,000: pounds of food grown, harvested and donated in 2013
200,000: approximate pounds of potatoes grown, harvested and donated in 2013
3,000: people who volunteer
2003: year First Fruits Farm, Inc. became a nonprofit
100: groups that volunteer
Also see:
Where are they buried? Find out where notable Catholics in the Archdiocese of Baltimore are buried
Pilgrims bring home memories of Ireland
PrevNext