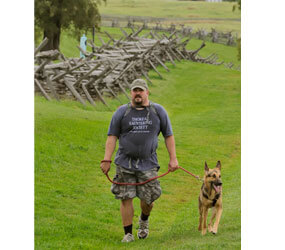 FREDERICK – In a move that seems inspired by the parable of the loaves and fishes, Terry Mahoney is hoping he can turn $6,000 into $60,000 for disabled veterans, thanks to some training hikes as long as 55 miles.

A veteran of Operation Desert Storm and parishioner of St. John in Westminster, Mahoney is wearing out shoe leather raising awareness for disabled military veterans. To that end, his goal is to raise the aforementioned $60,000 on his next fundraising hike, Nov. 6-11, when he’ll attempt to cover the 184 miles of the C&O Canal Towpath from Cumberland to Georgetown.

The money he hopes to raise will be added to $6,000 he has already seeded in a scholarship foundation honoring his late father, Ed, who believed that education was vitally important.

Mahoney plans to put the money to work to support a disabled veteran through Sentinels of Freedom, a program that provides injured veterans with support for education, counseling and other needs.

Mahoney, 41, served as a U.S. Marine in Iraq and Yugoslavia in the 1990s. His good fortune in finishing his service unharmed after seeing others lose limbs has haunted him. Last year, after praying about whether to undertake his idea of the hiking series, he began training and spreading the word about his cause, which he calls “Walking for Those Who Can’t.”

While his November hike is the fundraising capstone, he has used five training hikes to establish credibility with potential contributors.

All his hikes have interwoven his life passions: the Marine Corps and his Catholic faith.

“I couldn’t complete what I’ve done without faith,” he said.

Rosaries sustain him along the trails; during his first hike in April, he was exhausted, soaked by drenching storms, and fighting strong winds and blistered feet.

“I knew that I would need St. Elizabeth Ann’s help, and I was right,” he said of the prayers and rosaries that kept him going to the end. “I could feel her there with me.”

That first hike, in April, followed was inspired by St. Elizabeth Ann Seton, moving from the site of where she taught in downtown Baltimore to where she began a Catholic school in Emmitsburg.

“I want people to know, I’m very proud to be a Catholic Marine,” he said.

His second hike, on Flag Day, was an 18-mile trek to highlights of 1814’s the Battle of Baltimore. His third was a three-day, 95-mile hike in honor of Marine Corps Lt. Lewis Puller, Jr., who lost both his legs and hands to a land mine in Vietnam. It went from Saluda, Va., to the Marine Corps Museum in Quantico, Va.

Last weekend he completed a 50-mile hike from Frederick to Harpers Ferry, W.Va. The Sept. 17 leg included a visit to Antietam National Battlefield, on the 149th anniversary of the Civil War battle that was the bloodiest day in our nation’s history.

His final training hike before November is next month, when he plans to cover 45 miles in one day through the mountains of the Appalachian Trail from Pennsylvania to Virginia.

Although Terry’s wife, Mary, and children, Ed, 15, Tom, 12 and Elizabeth Anne (named after the St. Elizabeth Ann Seton) support him in many ways, they don’t hike with him. The family dog, Karlos, a four-year-old German Shepherd, provides companionship on the road.

He launched his most recent training hike Sept. 16, from the National Museum for Civil War Medicine in Frederick, where Director George Wunderlich, also a Catholic leadership trainer, and others joined him.

“We’re here to see you off; at this museum, we train the doctors who work on people like you,” Wunderlich said. “You need our support.”