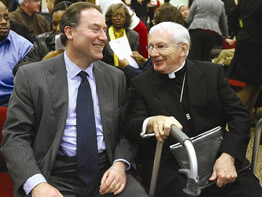 A Baltimore-based Jewish foundation is pledging $3.5 million to Baltimore City Catholic schools in an effort to boost enrollment and attract even more financial support for urban-based Catholic education.
In a Dec. 14 event at the Catholic Center in Baltimore, Cardinal William H. Keeler and Donn Weinberg of the Harry and Jeanette Weinberg Foundation announced the Weinberg Foundation will donate $500,000 this year and $1 million for the next three years to benefit at-risk students who attend K-12 in one of 17 Catholic elementary/middle schools and three high schools.

The grant is contingent on the Archdiocese of Baltimore finding matching grants from other donors.
“We know the best way out of poverty is a good education,” said Mr. Weinberg, noting that 10 percent of his foundation grants are geared to education.

When officials from the foundation visited several Catholic schools in Baltimore as they were contemplating making a donation, Mr. Weinberg said they were “blown away” by the quality education they observed.

“We were touched and totally impressed,” he said. “We saw a lot of learning going on. These schools are a remarkable success story.”

PIE schools, which currently enroll 4,487 students, have an attendance rate of 98 percent, according to the archdiocese. They have no measurable drop-out rate and have boasted strong scores on standardized tests.

In an interview with The Catholic Review, Cardinal Keeler said he has “no doubt” that as other businesses, organizations and individuals learn about the merits of PIE schools, money will be raised to match the Weinberg grant.

Catholic education offers hope to children who “otherwise would not have the opportunity to end the cycle of poverty in their families and neighborhoods,” he said.

The Weinberg grant funds must be used for new students, and the archdiocese is hoping to boost enrollment by more than 500 in the next four years.

Mr. Weinberg said it was a sign of continuing Catholic-Jewish cooperation that a Jewish foundation would support Catholic schools that serve mostly non-Jewish and non-Catholic students.

Known as “Weinberg Scholars,” students will receive as much as $2,500 in tuition assistance each year.
Each school will be delegating five parents or guardians to advocate in the community on behalf of their school to let people know about the value of a Catholic school education, according to an archdiocesan press release.

“Some of our schools exist in some of the most troubled neighborhoods in Baltimore City, but they succeed because of their disciplined structure, rigorous instruction and deep belief in the potential of these highly motivated, yet disadvantaged children,” said Dr. Ronald J. Valenti, superintendent of Catholic schools.

The average tuition of PIE schools is $4,300 for elementary/middle schools and $7,250 for high schools. The cost to educate one student is, on average, $1,000 more than tuition.

The Weinberg Foundation is the 22nd largest foundation in the United States, with assets of more than $2.1 billion. The Baltimore region receives approximately $25-$30 million of the foundations annual grants.