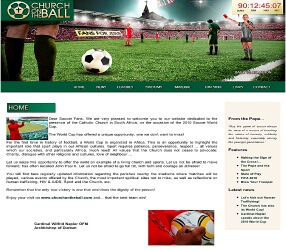 CAPE TOWN, South Africa – The diversity of the church in South Africa and its many ministries and programs are being promoted to thousands of World Cup soccer fans on a new Web site launched by the country’s bishops.

“We’re saying to football fans, ‘You can’t watch all the time, come and see what the church is doing and the projects it’s involved in,’ ” Father Townsend told Catholic News Service from Pretoria, South Africa.

In a video on the site, www.churchontheball.com, Cardinal Wilfrid Napier of Durban can be seen kicking a ball and blowing a vuvuzela, a long horn commonly blown by soccer fans during a match.

The South African church “wants to seize the opportunity of the World Cup to highlight the important role that sport plays in our African cultures,” Cardinal Napier said on the Web site’s home page.

“Sport requires practice, patience, perseverance, respect, all values which our societies, and particularly Africa, much need; all values that the church does not cease to advocate: charity, dialogue with other religions and cultures, love of neighbor,” the cardinal said.

A virtual chapel will be set up on the site where fans can leave prayer intentions for their teams, Father Townsend said in a March 5 statement. “Virtual candles” will cost 10 South African rands ($1.20), which will fund local church projects.

Visitors “may want to use some of their spare time helping to plant vegetable gardens, volunteering at hospices or taking part in other efforts the local church is making to improve people’s lives,” Father Townsend told CNS.

South Africa has invested billions of dollars in infrastructure improvements to host the world’s largest soccer championship. Upwards of 500,000 fans are expected.

Hosting the tournament has brought “a massive injection of finance and labor into the South African economy,” said Father Sean O’Leary, director of the Pretoria-based Denis Hurley Peace Institute.

Noting that South Africa has one of the world’s largest gaps between the rich and the poor, Father O’Leary said that with “such an economic imbalance, the price of tickets for games becomes an issue.”

“In a country where the majority of families live on $200 a month or less, the cheapest tickets at $20 are simply too expensive,” he said on the site.

But, “to its credit, the South African government has legislated that all World Cup games have to be shown on national television and cannot be privatized,” he said.

South Africa’s football association “has successfully used the build-up to the World Cup to do serious promotion of the game in the most disadvantaged areas,” Father O’Leary said. “Soccer pitches are springing up all over the country with improved facilities and legends such as Diego Maradona and David Beckham … have been invited to the country to hold soccer camps in the poorest of areas.”