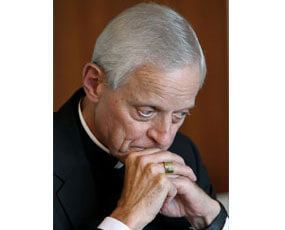 WASHINGTON – The Vatican’s decision to declare the attempted ordination of women a major church crime reflects “the seriousness with which it holds offenses against the sacrament of holy orders” and is not a sign of disrespect toward women, Archbishop Donald W. Wuerl of Washington said July 15.

The archbishop, who chairs the U.S. bishops’ Committee on Doctrine, spoke at a news briefing in the headquarters of the U.S. Conference of Catholic Bishops hours after the Vatican issued new norms for handling priestly sex abuse cases and updated its list of the “more grave crimes” against church law, including for the first time the “attempted sacred ordination of a woman.”

In such an act, the Vatican said, the cleric and the woman involved are automatically excommunicated, and the cleric can also be dismissed from the priesthood.

“Women offer unique insight, creative abilities and unstinting generosity at the very heart of the Catholic Church,” he said.

But, the archbishop said, “the Catholic Church through its long and constant teaching holds that ordination has been, from the beginning, reserved to men, a fact which cannot be changed despite changing times.”

The Vatican action drew a sharp response from Erin Saiz Hanna, executive director of the Women’s Ordination Conference, founded in 1975 to promote the ordination of women as Catholic priests, deacons and bishops.

Hanna called the decision “appalling, offensive and a wake-up call for all Catholics around the world.”

“The idea that a woman seeking to spread the message of God somehow ‘defiles’ the Eucharist reveals an antiquated, backwards church that still views women as ‘unclean’ and unholy,” she said in a news release.

Archbishop Wuerl said at the briefing that the norms should be seen as “a list of those areas that the church considers of great significance,” adding that “it is not surprising that most are sacramental.”

In addition to declaring women’s ordination a more grave crime against church law, the norms also condemn the attempted or simulated celebration of the Eucharist, any attempt to hear confession when one is unable to give valid sacramental absolution, and the recording of a confession or its “malicious diffusion” through any means of social communications.

Archbishop Wuerl said the latter prohibition did not necessarily mean the Vatican had seen an uptick in violations of the confessional seal related to social media, but indicated an awareness that the seal of confession “can now be violated in ways we never envisioned before.”

“It’s a recognition that we live in new circumstances,” he added.

Asked whether it might have been a public relations mistake for the Vatican to include women’s ordination and clergy sex abuse of minors in the same document, the archbishop said the revised norms were “intended to contain a variety of different elements.”

He said one way to distinguish between the different elements was to hold separate news conferences on the women’s ordination aspect and the clerical sex abuse aspect of the norms, as the USCCB had done.

Bishop Blase J. Cupich, who is to be installed Sept. 3 as head of the Diocese of Spokane, Wash., spoke about the norms as they related to sex abuse in a news briefing before Archbishop Wuerl’s. Bishop Cupich chairs the USCCB Committee on the Protection of Children and Young People.

Roman Catholic WomenPriests, an organization that is not recognized by the church but claims that more than 100 women worldwide have been ordained priests or bishops in the past eight years, responded to what it called “the Vatican’s equating women’s ordination with pedophilia by priests” with a demand that the Vatican “affirm women’s full equality in the church, including priestly ministry.”

“We demand an end to misogyny in the Catholic Church,” the group said in a statement. “We demand that the Vatican adopt reforms to transform church laws and practices to reflect transparency, accountability, justice and equality for all.”

Ceremonies carried out by the group have led to the excommunications of the women and those who ordained them.

Hanna of the Women’s Ordination Conference called the Vatican document “a scare tactic to already ‘excommunicated’ women” and those who support them and said supporters of women’s ordination should “discontinue all financial contributions that benefit” the USCCB until the bishops agree to “release the names of all accused Catholic leaders.”

“Excommunication did not work and neither will this,” she said. “In the face of one closed door after another, Catholic women will continue to make a way when there is none.”

In 2008, the doctrinal congregation formally decreed that a woman who attempts to be ordained a Catholic priest and the person attempting to ordain her are automatically excommunicated. In 1994, Pope John Paul II said the church’s ban on women priests is definitive and not open to debate among Catholics.