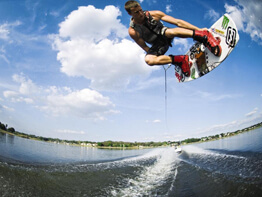 Always eager to engage in a new sporting activity, 36-year-old Coleman Devlin quenched his thirst for adventure when he dove into wakeboarding 10 years ago.
“The versatility of what you can do wakeboarding is 100 times what you can do on skiis,” said the financial advisor for Ryan Beck & Co, who attends St. Mary Star of the Sea in Federal Hill. “You can go backwards. You can go forwards. You can do a 180 air. You can jump across the lake, you can flip.”

A water sport which involves a rider being towed on a single board behind a boat, wakeboarding is a combination of water skiing, snow boarding and surfing techniques. A wakeboarder typically travels an average of 20 mph and rides the wake of a speed boat.

“Riding on a board across water is such a fun and exhilarating thing to do,” said Kevin Michael, senior editor for WakeBoarding magazine (www.wakeboardingmag.com) based in Orlando, Fla. “Everyone who rides on a regular basis does it because they truly love the feeling.”

Wakeboarding appeals to every age, although Mr. Michael points out there is a big youth movement and “now there are riders in their 20s and 30s who ride recreationally and love it.”

“It’s a lot easier than water skiing,” said the blue-eyed Mr. Devlin, who also plays lacrosse and is an avid mountain biker. “You’re only dealing with one plank instead of two – it’s a little harder to get up, but once you do it’s pretty easy.”

Mr. Michael said anyone with a desire to get started should pay for a lesson or go with a friend who has all the wakeboarding equipment.

“After your first few runs, you’ll be able to determine what you like and don’t like about your gear and then start piecing together your own setup,” said Mr. Michael.

He said equipment rental can be found in Maryland through Water Ways in Ocean City.
Mr. Devlin wakeboards about three times a week during the summer months on the Magothy River, which runs south of the Patapsco River and north of the Severn River. A board and bindings can average $200-300 while high-end equipment might cost $500-600, he said.

Wakeboarding is also “a great full-body exercise for anyone including first-time riders to today’s top professionals,” said Mr. Michael.

“I think the main thing about wakeboarding is that from the lowest level novice to the most skilled, everybody has fun doing it,” said Mr. Devlin. “You don’t have to be good at it to have fun.”