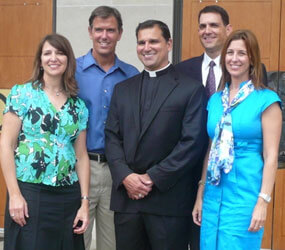 Mark Viviano jumped into a rental car outside a St. Louis airport May 28 and sped toward the Cathedral of St. Joseph in Jefferson City, 90 minutes away.

“I don’t even know, to this day, how I got there so fast,” the sports director and anchor of Baltimore’s WJZ-13 said. “I was probably going faster than I even care to recognize.”

Mark dashed into the cathedral’s narthex and looked toward the front of the church. Just then, Bishop John R. Gaydos handed Mark’s brother Tony a dalmatic, a liturgical vestment symbolizing his new status as a transitional deacon.

“During the ceremony,” Mark remembered, “he looked out and saw me. He was shocked. He’s always been my big brother, always been a leader. He’s just taking it to another level.”

If everything goes according to plan, he will be a priest next spring.

Joseph and Patricia Viviano raised their five children outside of St. Louis, sent them to Catholic schools, attended Masses, prayed the rosary and volunteered with charities together.

“My dad and mom were faithful to the core,” Deacon Viviano said. “I always considered my dad the North Star. When I would get off track, I could look at him and see the way.”

Mark says that his 76-year-old father, who owned and operated a fruit and produce business, always signs letters with “Stay close to our Lord.”

The Viviano boys, along with younger brother Joseph, were naturally athletic and played many sports growing up. To this day, Mark and Deacon Viviano go to the gym together and also play sports when possible. Mark is an avid runner and participates in the annual Baltimore Marathon, among many races.

When Tony and Mark were in their late teens, Patricia suffered from Hodgkin’s disease. Mark was home the day his mother was unresponsive.

“There was a priest there before the ambulance,” Mark said.

He calls the death of his mother “the most monumental experience of my life. Faith got us through.”

Following his mother’s death, Deacon Viviano transferred to Benedictine College in Kansas. As he moved into adulthood, he took over the family business.

In his mid-20s, Deacon Viviano was in love with girlfriend, Debbie. She became pregnant and gave birth to a daughter, Melanie, 21 years ago. Although the couple never married, they remained committed to raising Melanie.

“She’s my heart and my joy,” Deacon Viviano said of his daughter.

Deacon Viviano remained so close with Debbie over the years that he was the godfather of her eighth child, John Paul, and baptized her ninth the day after he was ordained in May.

“It’s a total grace,” Tony said. “It’s a total blessing because we realize we’re probably in the one percentile of people in that situation.”

About seven years ago, Deacon Viviano had what he calls a “spiritual re-awakening,” and started going to daily Mass, praying the rosary and adoring the Blessed Sacrament.

“The fire was starting to really catch,” he said. “After a while I started talking to the parish priest and he happened to be a second career vocation guy himself. I told him what was going on.”

Upon the priest’s recommendation, Deacon Viviano started volunteering nearly 25 hours a week with local charities and assisting the Missionaries of Charity at a St. Louis soup kitchen. He was also inspired by their work with the mentally challenged and with the elderly.

“I had a pretty great life – I was a business owner, had my own house and things were great,” Deacon Viviano said. “You’re talking about a pretty drastic move for a guy who’s 44 years old and established.”

He turned to Debbie for guidance during the summer of 2008. She encouraged him to enroll in Sacred Heart School of Theology in Hales Corner, Wis., to be a seminarian for the Jefferson City Diocese.

“At that point (she) was probably my main confidant,” Deacon Viviano said. “She was supportive from the get-go. She was confident and said, ‘This is absolutely what you should be doing. Don’t even hesitate.’ She was all over it. ”

Balance in a sport-driven life

Mark Viviano was a major supporter of Deacon Viviano’s decision.

“Tony always indicated there was more to life than running a business,” Mark said.

Mark doesn’t let his professional life interfere with living his faith. It’s challenge since there are games on Saturdays and Sundays.

“That could be an excuse,” Mark said. “There’s not an excuse if that’s a priority in your life and that’s how you chose to live your life.”

Mark used the Ravens bye week to travel to his family’s Missouri home.

“I look forward to going to Mass early,” he said in a phone conversation from there. “When I come out here, it’s about watching Cardinals games and going to Mass together.”

Viviano walked away from his daily radio show this summer to ease his hectic schedule, which also includes work for the Mid-Atlantic Sports Network. He now goes to daily 12:10 p.m. Mass at St. Ignatius in Baltimore and is a parishioner of the Catholic Community of South Baltimore.

“Everything comes back to your base beliefs,” Mark said. “That’s one of those things that was ingrained in me at a young age.”

Deacon Viviano said of his brother: “Mark’s always been a spiritual guy. He’s very dedicated. It’s not just about a Sunday obligation. He gets out there and involved in charity work and charity runs. He lives the faith. I’m always proud of him for doing that.”

Mark annually visits Sacred Heart’s seminary to visit his brother and admits seminarians ask if he would consider the vocational call too.

“They try and recruit me,” Mark said with a laugh. “I always say ‘I have way too much respect for what you guys are doing to have anything less than a serious thought about it.’”

For now, there is one Viviano on the path to the priesthood. Mark fondly remembers watching his father proudly cry during the diaconate ordination.

“That’s one of the greatest days of my life, and I imagine it’ll only be surpassed when (Tony’s) ordained a priest.”

Deacon Viviano said he would recommend others considering the priesthood to remain open to the calling. He considers his path a gift.

“It’s so much bigger than me,” Deacon Viviano said. “However God guides and leads, whatever doors he opens, I’m just going to walk through them. That’s always been one of my prayers – that I stay out of the way. I’ve just got to be open to the grace and be vigilant to the prayer life.”