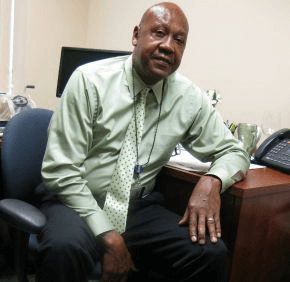 As he hustled up Fallsway toward the Baltimore City prison complex, Father Charles Canterna’s Roman collar and black blazer were a sight to the frequenters of Catholic Charities’ Our Daily Bread and other nearby services for the poor and homeless.

In the early September heat, a man walking in the opposite direction put his hands together in an expression of prayer as he passed the robust 67-year-old priest.

“Bless me, Father, for I have sinned,” he said, his smirk both playful and sincere.

Father Canterna, known to the city’s prisoners and homeless as “Father Chuck,” draped his arm over the man’s back as they prayed together mid-crosswalk, their heads bowed.

“Years ago, I never wore the collar,” explained Father Canterna, who was ordained in 1976. “I kind of regret it because I missed all these opportunities for prayer.”

A string of similar encounters occurred before the chaplain of Chesapeake Detention Facility and full-time city prison minister reached the complex of jails he serves.

Pope Francis has made headlines for his outreach to the imprisoned, including at a notorious Bolivia facility and his planned Sept. 27 visit to Curran-Fromhold Correctional Facility in Philadelphia. It is a ministry that has long been championed in the Archdiocese of Baltimore by Father Canterna and others.

According to Deacon Seigfried Presberry, director of the archdiocesan Office of Prison Ministry, it is the work of several full-time prison ministers and a cadre of dedicated volunteers that affords inmates from Baltimore to Jessup to Hagerstown to Cumberland the opportunity to practice their faith.

“I get letters from inmates, their parents or their friends, wanting to know, ‘How can my son receive the sacraments, now that he’s turned his life over to God?’” Deacon Presberry said.

“I keep telling them that God’s going to do something soon, but I need prayers.”

The goal is for inmates to receive the opportunity to attend Mass and have the same access to sacraments as those on the outside, he said, adding that his office makes the most of available resources.

“You might have Mass at six in the morning on a Tuesday, once a month,” Deacon Presberry said. “In another place, you might have a priest who can do it once a week.”

Father Charles Canterna, a priest of the Archdiocese of Baltimore, has been a full-time prison minister since the early 1980s. (Erik Zygmont/CR Staff)

At the women’s wing of the Baltimore City Detention Center – which, unlike the men’s wing, remains in operation – Sister of St. Joseph Kathy Clafin “does beautifully with what she’s working with,” Deacon Presberry added.

For Father Canterna, prison ministry is simply an extension of a powerful calling he has felt since he was in seminary in the early 1970s.

Inspired by St. Francis of Assisi, Blessed Teresa of Kolkata, St. John Paul II and Dorothy Day, “my main focus was just to work with the poor and the homeless,” he said.

Thanks to the “love and openness” of Archbishop William D. Borders, he was assigned to St. Vincent de Paul Parish, located just south of Our Daily Bread and near the former Lafayette Courts and Flag House Courts public housing projects.

Working his street ministry, he said, “I always seemed to end up at the jail. So many people on these streets are arrested for various crimes.”

In 1982, Archbishop Borders asked Father Canterna to take over as chaplain at the former Baltimore City Jail and the Maryland Penitentiary.

Since then, he has been a constant presence in the Baltimore City prisons, his name frequently appearing in media accounts of executions, the last of which occurred in Maryland in 2006.

In 2001, Deacon Presberry, then a correctional officer assigned to the “death squad” at the Baltimore City Detention Center, encountered “the God that forgives” in a death row inmate who had found healing through Father Canterna’s ministry.

Then Baptist, Deacon Presberry enrolled in the Rite of Christian Initiation of Adults. Very soon after becoming Catholic, he became a candidate for ordination to the permanent diaconate. As a deacon, he felt he could no longer “serve two masters,” and he retired from the prison system.

One day, he received a phone call from the archdiocese, asking him if he would consider heading the Office of Prison Ministry. He took the position Feb. 14, 2011.

“Never in my wildest dreams did I think I would be doing this at my age,” said Deacon Presberry, 61, who is also assigned to St. Mark in Catonsville. “Here I am – He does work in mysterious ways.”

Father Canterna, too, knows how he got to where he is.

“God is so good,” he said, sweating as he made his way up Fallsway to visit his parishioners behind bars. “He answers prayers. This is what I always wanted, and he gave it to me.”

Click here more information on prison ministry in the archdiocese.