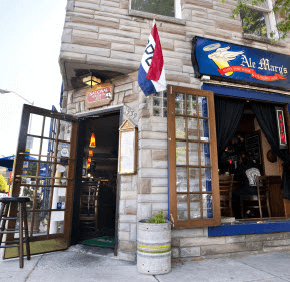 A Fells Point bar has some Catholics up in arms over religious items on display.

Up to seven protestors spent one hour April 14 standing across the street from Ale Mary’s holding signs, rosaries and praying Hail Marys.

Mary Rivers, who co-owns the bar with husband Tom Rivers, 45, and brother-in-law William Rivers, 57, said the chalices, a monstrance marked with the “Natty Boh” logo and crucifixes in the bar were gifts from customers. They have no intention of removing the items.

“We didn’t create this business to offend or ridicule anyone,” said Rivers, who said she has certificates stating that the items are desanctified. The bar opened seven years ago.

“No one is using this as a toilet,” said Rivers, who said she and her family are Catholic, but do not belong to a parish. “We do appreciate Catholicism.”

Catherine Combier-Donovan, director of the Archdiocese of Baltimore’s Office of Worship, said for the items to be used for “secular purposes, they need to be declared no longer sacred.”

Upon request, bishops or the vicar general, for example, can issue a statement stating that a vessel “is no longer sacred and can be used” for secular purposes, Combier-Donovan said.

Many desanctified vessels are sold at antique stores, for example, and can be used for secular purposes, Combier-Donovan said.

“Whether this is appropriate in a city where there is a large Catholic population may be not the best judgment,” Combier-Donovan said. “I think what happens is it’s shocking to people’s sensibilities. When it shocks, I’m not sure that’s a good thing.”

Owners of Ale Mary’s – a play on “Hail Mary” – said they did not steal the items on display at their pub.

Jack Ames, a protestor and parishioner of the Cathedral of Mary Our Queen, Homeland, called the display at Ale Mary’s “blasphemous.”

“I’d like to see this place shut down,” Ames said. “They’re using holy vessels that contained the blood of Jesus Christ.”

“It’s America,” said McCollum, 41. “You can have an ax to grind about anything. I haven’t been a fan of trying to hurt someone.”

Two Facebook pages have been established related to the religious symbols controversy: “500,000 Against Ale Mary’s Abuse of the Sacred and the Sublime” and “500,000 Supporting Free Speech &
Ale Mary’s.”