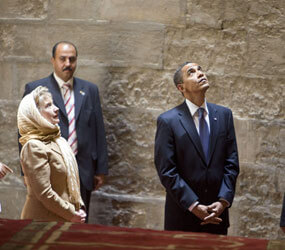 VATICAN CITY – U.S. President Barack Obama’s speech in Cairo, Egypt, was welcomed by Vatican media as a step toward peace and a new beginning in American relations with Muslims.

The Vatican newspaper, L’Osservatore Romano, ran a front-page story June 4 on Obama’s speech earlier that day. The newspaper called it an effort to open “a new beginning in relations between the United States and the Arab world.”

It said the president “went beyond political formulas, evoking concrete common interests in the name of a common humanity,” including peace, security, education, work, family life and religious values.

On the question of Iraq, the newspaper said, Obama “marked a break with the past” by citing the need for the United States to use diplomacy and international consensus to solve problems.

Vatican Radio also reported on the speech, saying that it “went beyond expectations” as a reconciliation effort with Muslim countries.

“The words pronounced at the University of Cairo are much more than an extended hand, but the foundation of a real common platform for launching what (Obama) defines as a new beginning in relations between the United States and the Middle East,” it said.

The Vatican spokesman, Jesuit Father Federico Lombardi, called the speech “very important” and “very significant” not only for relations between the United States and Muslim countries but also for international peace.

In an interview with Vatican Radio, Mario Scialoja, an official of the Islamic Cultural Center of Italy, said Obama’s speech signaled a change from the approach of the administration of former President George W. Bush. He said it was especially important that Obama recognized Muslims as a part of American society and called Islam a religion of peace, citing verses from the Quran.

“It seems to me that Obama has touched the right chords in the hearts of Muslims and the entire world and that he has opened an era of more receptive and more frank dialogue between the United States and the Islamic world,” Scialoja said.