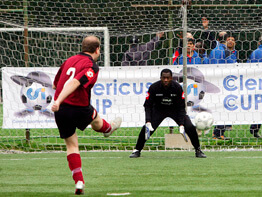 ROME – The goal was a bullet into the net, and as his cheering teammates mobbed Daniel O’Mullane it seemed like a World Cup celebration.

Mr. O’Mullane had just led Pontifical North American College to a dramatic first-round victory in the 16-team Clericus Cup, the soccer tournament exclusively for priests and seminarians in Rome.

The North American College squad beat the highly touted Pontifical Urbanian University 4-3 March 3 in a shootout after regular time ended in a 0-0 tie. When Mr. O’Mullane made the final shot, pandemonium erupted among the 60 or so U.S. flag-waving fans who watched from the sidelines.

“I felt some pressure. I’d never been in that position before,” Mr. O’Mullane said after the match. The 25-year-old seminarian, a native of England and a naturalized U.S. citizen, is co-captain of the North American College squad, which calls itself the North American Martyrs.

Urbanian College, an institution for seminarians from mission countries, fielded a mostly African team that was strong and swift, with several experienced players. But the Martyrs, who had trained extensively in previous weeks, seemed to play better as a team.

In the first half the Martyrs had five shots on goal, including one blast that bounced off the crossbar, provoking groans from the college’s cheering section. There were fewer scoring opportunities in the second half, but the Martyrs continued to play tough defense.

As Monsignor James F. Checchio, rector of the North American College, paced nearby, the teams lined up for the shootout of five kicks each. The first Martyrs shooter bounced one off the crossbar. Urbanian had the lead briefly, but one of its players sent a shot sailing over the net.

Then with the shootout deadlocked at 2-2, Martyrs goalie Andrew Roza made a brilliant save, just getting a hand on a sharp skidding shot. Mr. O’Mullane’s winning goal came two kicks later.

The match saw only a few minor fouls and lots of good sportsmanship. Trainer Greg Rannazzisi, who once worked as a paramedic in New York before joining the seminary, walked the sidelines with a stethoscope in his pocket, but never needed to use it.

Fans could see this was a different kind of tournament when both teams huddled for midfield prayers before each half. Martyrs benchwarmers occasionally spent time reading from the breviary or “The Shorter Book of Blessings.”

A crew from the British Broadcasting Corp. was there to film the event. The Clericus Cup, which ends in June, has already drawn an unexpected amount of media attention – something Martyrs players are happy about, in part because it reveals a different side of seminary life.

“This soccer tournament is not all about winning. First and foremost it’s about evangelization,” said Josh Waltz, a seminarian from Bismarck, N.D.
“The overall principle is to show the world charity through sports – and to have fun,” he said.

Mr. Waltz, a defenseman who spent much of the game thwarting Urbanian’s fast breaks, described the match as “physical.”

“I’ve got horrible ankles. I think I sprained them about 10 times,” he said, then ran over to join a team photo and final prayer of thanksgiving.