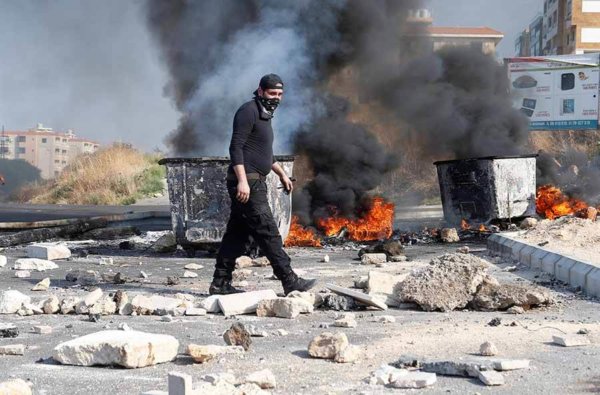 WASHINGTON (CNS) — The U.S. bishops and the Knights of Columbus offered their “prayerful solidarity” to the Assembly of the Catholic Patriarchs and Bishops of Lebanon as Iraq and Lebanon experience protests against political corruption and foreign interference.

The support came in a Nov. 13 letter from Archbishop Timothy P. Broglio of the U.S. Archdiocese for the Military Services, chairman of the U.S. bishops’ Committee on International Justice and Peace, and Carl Anderson, supreme knight of the Knights of Columbus.

“We pray that the effect of these protests will be a more just society for all the citizens of these two countries,” the letter from the U.S. leaders said. The Mideast leaders were meeting at Bkerke, the Maronite patriarchate north of Beirut.

“We urge the Iraqi and Lebanese governments to engage in a meaningful dialogue with those demonstrators, and we stand with you in urging governments to remember they exist to serve the common good of their people,” the letter continued.

Archbishop Broglio and Anderson wrote that they joined Pope Francis in calling on the Iraqi government to “listen to the cry of the people who are asking for a dignified and peaceful life,” especially as government security forces have fired live ammunition, rubber bullets and tear gas cannisters directly at demonstrators.

As for Lebanon, the U.S. leaders again echoed the pope, who has said that a resolution to the crisis in the small country would be “for the benefit of the entire Middle East region, which suffers so much.”

“We believe that it is important that the outcome in both Iraq and Lebanon respect the sovereignty and autonomy of these two countries,” the letter said.

The archbishop and the Knights leader said they would continue to monitor events in both nations as well as elsewhere in the region, “where so many have suffered from war and violence and, in the case of Christians, have been targeted often simply for professing their belief in Christ.”

“We pray that peace and security may come to this region,” the letter added, “and that those who have suffered so much may be able to rebuild their lives in an environment consistent with their rights to human dignity.”

Members of the churches live throughout the Middle East, particularly in the countries where the protests have occurred.

Lebanon and Iraq have experienced massive protests in recent weeks as citizens demanded government reforms and leaders who are more responsive to the need for jobs and basic services.

Hundreds of thousands of Lebanese have taken to the streets in nonviolent protests across the country to demand an end to rampant corruption and poor public services. Cutting across sectarian lines, the demonstrators also want the current government of entrenched politicians dating to Lebanon’s 1975-1990 civil war era to step down.

The largely peaceful protests prompted the resignation of Prime Minister Saad Hariri Oct. 29, but he remains in a caretaker capacity, while political rivals haggle over the formation of a new government. Protesters say they are tired of the political “horse-trading” and the slow pace of talks, and that they want fresh faces who are politically clean.

In Iraq, protests have ebbed and waned in Baghdad and the country’s southern provinces. Protesters have called for the end of a political system that they contend does not prioritize their concerns and needs.

Demonstrators, primarily young people, have called attention to the lack of jobs and economic opportunities despite an influx of oil money. They have targeted government corruption and inadequate basic services, according to media reports.

Since the unrest began Oct. 1, at least 320 people have died and thousands have been wounded, the Associated Press reported.