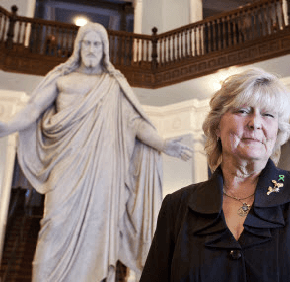 DUNDALK – Standing in the sunlight streaming through her front door, 60-year-old Rose Stelmack smiled, revealing tiny creases in her cheeks.

“My friends say I should use cream,” she said, “but I’m thankful for the wrinkles because I didn’t think I’d have them.”

At age 42, Stelmack underwent surgery for a perforated colon, but in recovery she developed jaundice. Blood work revealed she had Hepatitis C, a disease she had never heard of.

A virus, Hepatitis C scars the liver, causing cirrhosis, and, for some, liver failure, liver cancer and other life-threatening damage to the esophagus and gastrointestinal system. The disease is one of the leading reasons people need liver transplants, according to the New York City-based American Liver Foundation.

A parishioner of Our Lady of Hope in Dundalk, Stelmack spent a decade researching Hepatitis C, learning to care for herself and trying to determine how she contracted the disease, which is transferred by blood-to-blood contact. She suspects blood transfusions during surgeries she had as a teen, in the years before donor blood was screened for Hepatitis C.

Whatever the cause, the disease eventually led Stelmack, a mother of two boys, to join the national liver transplant list, managed by the United Network for Organ Sharing, or UNOS. Four years later, at age 52, she was diagnosed with liver cancer.

“I really believed I was going to die,” she said.

As the seasons progressed, she thought she was witnessing her last Christmas, her last summer.

“It was really depressing,” she said. “I would be thinking, ‘Next year?’ There’s no next year for me.”

She gave belongings away to friends and family, and wondered about the grandchildren she feared she would never know. Sometimes she would stand outside her home – then in northern Baltimore County – stare into the sky and pray for strength, she said.

During her inpatient recovery, she found comfort in visiting Johns Hopkins’ 10-foot marble statue of Jesus, “Christus Consolator,” located in the Billings Administration Building. She always trusted that her life was in God’s hands, she said.

In addition to her faith, she finds strength in a monthly support group she leads at Mercy, where her hepatologist Dr. Paul Thuluvath is the medical director of The Melissa L. Posner Institute for Digestive Health and Liver Disease.

The meeting involves a short lecture from an expert and time for patients to share their experiences. It feels good to be around others who care and understand, Stelmack said.

“Sometimes it’s just good to laugh and say out loud that you’re sick,” she said.

In the seven years since her transplant, Stelmack’s health has waxed and waned, but she has embraced life with newfound brio. She is free of cancer and hopeful that a new drug might be an effective treatment for Hepatitis C, which still threatens her new liver. She wonders about her donor, who she knows was a man, and feels a deep sense of gratitude toward his family, although she has never met them.

She now focuses on caring for her 84-year-old mother and 21-year-old son with special needs, both of who live with her.

Her other son is married with two daughters, and one on the way – the grandchildren she once feared she would never live to see, but who are now very much part of her life.

National Organ Day is Feb. 14. To learn more about organ donation, which Pope Benedict XVI has called “an act of love,” visit the website of The Living Legacy Foundation, thellf.org.