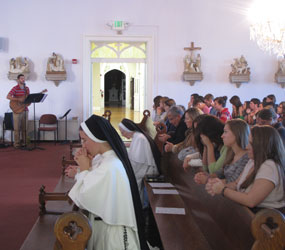 CATONSVILLE – The crowd was markedly different in size, but the passion was just as fervent.

A small group of people and adults who traveled to World Youth Day in Madrid were joined by Archbishop Edwin F. O’Brien, apostolic administrator of the Archdiocese of Baltimore, for a reunion at Mount de Sales Academy in Catonsville Oct. 15.

Archbishop O’Brien celebrated a Mass and attended a question and answered session guided by Scott Miller, director of the division of youth and young adult ministry for the archdiocese.

He said the pope, more than anything, has moral and spiritual authority.

“His role is to remind us of the great dignity that is ours and the love that God wants to shower on every one of us,” Archbishop O’Brien told the young people during his homily.

World Youth Day was held Aug. 16-21 in Madrid, with nearly two million people attending the final Mass, celebrated by the pope on a former air base.

The archdiocese, Mount de Sales and St. Mary’s High School in Annapolis each sent contingents to Europe, while individual groups went as well.

“Each one of us,” the archbishop said, “is made to the image and likeness of God. Whether we lived in the 10th century before Christ, or as Christ preached, or whether we filled those fields in Spain, every human being can look in the mirror. You are made to God’s image and likeness. You are stamped, indelibly, with the image of God on your soul.”

The archbishop said that gift brings great responsibility to protect life from conception on, advance the spiritual and material progress of society and carry out Godly works. He also said young people must know and strongly embrace their faith and evangelize through good example.

“I’d definitely do it again,” McNamara said. “My favorite part was probably seeing the youth around the world and sharing with all the people who have different languages and backgrounds. Everyone shared one main thing.”

American young people saw that there was more to their faith than a parish.

“We would be walking the streets and people would be chanting and singing with their flags,” McNamara said. “It definitely strengthened my faith and gave me a better outlook on the universal church.”

“I was on the fence about my faith and wasn’t sure it was right for me,” she admitted. “So, when I was on World Youth Day, it was so reassuring that everyone in my parish and my school was really supportive of me and my decisions.”

“I’m trying to show that being in touch with your faith is a really awesome, rewarding experience,” Harrison said.