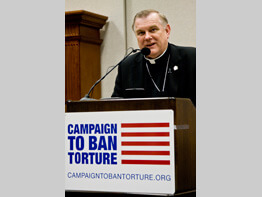 ORLANDO, Fla. – Torture is a violation of fundamental human rights and has proven to be ineffective in obtaining worthwhile intelligence from foreign detainees, the chairman of the U.S. bishops’ Committee on International Justice and Peace said.

“Intelligence experts themselves say that the individual being tortured will say whatever those torturing him want to hear, and in no way advances the goal of having reliable and timely intelligence,” Bishop Thomas G. Wenski of Orlando, Fla., said during an Oct. 16 program sponsored by the Center for Victims of Torture at the main branch of the Orlando Public Library.

The bishop joined other interfaith leaders and retired military officials at the forum in calling for a presidential ban on torture and cruelty.

Bishop Wenski’s comments about torture were his most recent on the topic. In February in his column in the Florida Catholic diocesan newspaper, he wrote that the U.S. “should hold itself to the highest ethical standards and fully comply with earlier commitments to observe international law in its treatment of detainees.”

He said such standards should apply to detainees in the U.S. or abroad as well as those turned over to allies for detention. “This is important to how the United States is viewed abroad; but, more importantly, human dignity is undermined once we allow ourselves to pursue an ethic of ends justifying means,” he said then.

The program was part of the Minnesota-based center’s Campaign to Ban Torture, an effort to create broader awareness of the treatment of detainees captured during military exercises and being held in prisons in Iraq and Afghanistan as well as in Guantanamo Bay, Cuba.

“The war against terrorism should reflect the character and the values of American citizens,” Douglas Johnson, executive director of the Center for Victims of Torture, told El Clarin, the Spanish-language newspaper of the Orlando Diocese.

“This is why our campaign calls the next president of the United States to end, immediately and decisively, the use of torture and inhuman treatments,” he added.

The campaign has been gaining support as documents and other evidence about the treatment of detainees has come to light, Johnson said.

“Torture opens the door to tyranny,” said Mr. Wilkerson, who worked with Mr. Powell when the abuse of prisoners at the Abu Ghraib prison in Iraq became public in 2004. Because of the brutality at Abu Ghraib, Mr. Wilkerson said he favors the immediate closing of the Guantanamo prison.

All the leaders at the program agreed that torture has negatively affected the moral leadership of the United States in the eyes of international friends and foes alike. They said the U.S. has lost credibility around the world and must begin working to recover its leadership role among nations.

Audience members were asked to sign the campaign’s declaration to ban torture. The declaration and supporting signatures will be presented to the newly inaugurated U.S. president, Johnson said.

At a public event in Ohio a few days before the Orlando gathering, Daniel J. Curran, president of the Marianist-run University of Dayton, and Cincinnati Archbishop Daniel E. Pilarzcyk signed the declaration.

More information on the efforts of the Center for Victims of Torture and its campaign can be found online at www.campaigntobantorture.org.