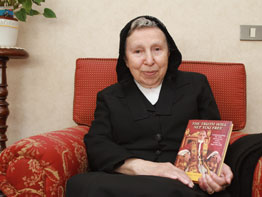 VATICAN CITY – Nearly 50 years after the death of Pope Pius XII, one of his strongest supporters thinks the beatification of this controversial wartime pontiff may be just around the corner.

The optimism of Sister Margherita Marchione, a member of the Religious Teachers Filippini, stems from her desire to see her tireless campaign to reveal the truth about this pontificate finally bear fruit.

She has spent the past decade gathering eyewitness evidence and documentation showing claims that Pope Pius did little or nothing to save the Jews from Nazi atrocities are based on ignorance, error or lies.

Of the 60 books she has authored, nine are dedicated to Pope Pius’ heroism before, during and after World War II.

She still spans the globe participating in countless speaking engagements and meetings. But this 86-year-old self-described “fighting nun” from New Jersey said she is finally feeling the toil wearing down on her small 5-foot frame.

“I don’t know what more I can do. But sooner or later the truth will be known,” she told Catholic News Service in Rome.

She said she has a hunch Pope Benedict XVI will declare Pope Pius venerable Oct. 9, during a Mass commemorating the death of Pope Pius on the same day in 1958.

The fact Pope Benedict has chosen to celebrate the Mass, along with positive remarks made to her by the Vatican’s secretary of state, Cardinal Tarcisio Bertone, have led her to believe Pope Pius’ canonization process is progressing.

But Pope Benedict set up a special commission to study new archival material about Pope Pius, and to examine how his possible beatification would impact Catholic-Jewish and Vatican-Israeli relations.

The commission is headed by Cardinal Bertone, another outspoken defender of Pope Pius’ wartime role. This led some to believe the commission was not a tactic to delay beatification indefinitely but a way to study new evidence.

Sister Marchione agreed, saying the commission “wants the truth.” She said the cardinal told her it has combed “through all these documents trying to find something against him, and there’s nothing.”

Based on her recent conversation with Cardinal Bertone, she said she believes the commission’s work of investigating new evidence is finished.

The pope’s Sept. 18 speech to participants of an international symposium highlighting the heroic efforts of Pope Pius was his strongest yet defending Pope Pius’ legacy.

Speaking to rabbis, Jewish scholars and members of the U.S.-based Pave the Way Foundation, the pope said Pope Pius “spared no effort in intervening” on behalf of the Jews and courageously worked behind the scenes to save thousands from the Nazis’ “criminal plan.”

Pope Benedict said many of Pope Pius’ efforts to support the Jews were “made secretly and silently” because “in that difficult historical moment, only in this way was it possible to avoid the worst and save the greatest number of Jews.”

Sister Marchione said that during the war many Jews urged the pope to refrain from harsh statements against the Nazis since vocal opposition often “boomeranged” and resulted in even more persecution.

In her new book to commemorate the 50th anniversary of the pope’s death, Sister Marchione condenses decades of controversy and historical research into a 100-page volume for people to learn about the charges levied against the pope and his heroic acts that had once brought him worldwide praise.

In the foreword of the book titled “The Truth Will Set You Free,” Cardinal Bertone recounts several occasions where he “strongly defended Pope Pius XII against critics” and gave testimony of why he thinks this pope “is worthy of beatification.”

Right after the war, Jews, world leaders and large media outlets such as The New York Times and The Palestine Post praised Pope Pius for his courageous efforts and calls for peace.

But that legacy was slowly replaced over the years by an insistent propaganda program orchestrated by Soviet communists, Sister Marchione and other scholars have said.

After surviving World War II and brutal nationalism, Italy had been ready to embrace an apparently more benevolent and fraternal state under communism.

But the same moral principles that underpinned the pope’s fierce opposition to Nazism and fascism also drove his disgust with communism, the sister said.

She said the Soviets’ smear campaign launched by government agents was payback for the pope helping convince Italy to keep the communists on the sidelines and put centrist Christian democrats in power.

Today’s negative opinions are based on the same biased, unfounded judgments that started with the KGB-funded fictitious play, “The Deputy,” which depicted the pope as a Nazi collaborator, she said.

But despite efforts to get accurate historical proof out to the public, especially Jewish communities, there is a lot of hesitancy by some to change their preconceived notions, Sister Marchione said.

“Each Jewish synagogue is independent of the other; they have no tie-in. So a big, universal topic like this (Pope Pius being an anti-Semite) seems to unite them unfortunately,” she said.

Another reason Pope Benedict wanted to delay Pope Pius’ beatification last year was fear that honoring a pope who is still controversial in the eyes of many would jettison decades of building up friendly relations with Israel and the Jews.

The record must be set straight, she added, because “it’s the truth that will set you free.”