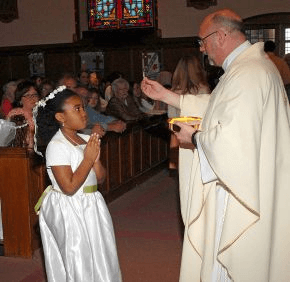 By Erik Zygmont
ezygmont@CatholicReview.org
Twitter: @ReviewErik
Ahead of Baltimore Archbishop William E. Lori’s call for parishes to work in clusters, a trio of religious education directors from northeast Baltimore County parishes joined forces to give parents a smoother, more fulfilling experience as they prepare their children for first Communion and reconciliation.
For their forward thinking, they received national recognition.
Laura Weatherington, Amie Post and Deacon Michael Baxter, who lead religious education at St. Ursula in Parkville, Immaculate Heart of Mary in Baynesville and St. Isaac Jogues in Carney, respectively, were recognized in May at the National Conference for Catechetical Leadership as recipients of the conference’s New Wineskins Award in Buffalo.
“Their intentional collaboration of parishes working together is a wonderful example of invitation, welcome, meeting people where they are, patience and prayer – all hallmarks of evangelization,” the NCCL said in a statement.

The NCCL’s words praise virtues similar to those emphasized in Archbishop Lori’s recent pastoral letter, “A Light Brightly Visible: Lighting the Path to Missionary Discipleship,” which reveals a plan for parishes to move toward ministering in clusters as they spread the Gospel to all within reach.
Soon after she became St. Ursula’s director of religious education in 2006, Weatherington initially reached out to neighboring parishes, but she wasn’t looking explicitly to pool resources. As she revealed in her application to the NCCL for the New Wineskins Award, she was simply reaching out to colleagues for ideas on improving her parish’s programs.
“The first year, it was not on my radar to collaborate with other parishes,” Weatherington wrote. “However, I did speak to several area catechetical leaders to get an idea of what was being offered in the area. Looking back, our process of collaboration began here as I slowly worked to adapt our program to a more contemporary understanding of formation rather than simply learning.”
Weatherington reached out to Amie Post, director of faith formation at Immaculate Heart of Mary, and the two found that their dialogue could improve both of their programs.
“The kind of running joke has been that I bring the creative spirit and Laura brings a wonderfully detailed mind,” Post said.
Later, Deacon Baxter of St. Isaac Jogues entered the picture.
“Instead of just having one little brain come up with something, we had three great, talented brains,” Post said, adding that Deacon Baxter brought practicality into the mix, with statements such as “Hey, these are great ideas, but did you guys wonder how much it’s going to cost?”
The three parishes now offer “transferable” retreats and workshops for first Communion and first reconciliation. Where each parish used to hold each formation event on two different days to give parents two options, each now holds just one, and parents get three options.
Paradoxically, the diversity of choices is linked to Weatherington’s desire to showcase the unity in the Catholic Church as a whole.
“Families in our area tend to move from parish to parish depending on perceived idiosyncrasies of parish structures or whether one ‘likes’ the pastor,” she wrote in the application for the award. “Our collaboration allows families to recognize that, though there are many locations for Catholic worship, it is one faith, one God and one church.”
“Sometimes it seems like we’re all in a competition to get more people in the pews and more money in the basket,” Weatherington elaborated to the Review. “But by saying, ‘It’s OK to go over there,’ it opens the concept of a universal church of one faith … but you also make it so we have a stable sense of what we’re about and what we’re offering,” she said.
Weatherington added that parents have the additional option of preparing their children at home – using catechetical materials – in lieu of a retreat or workshop.
“Our basic idea is to help parents in their basic roles as primary catechists for their own children,” she explained. “They’re the ones who know best what their children understand and don’t understand, and whether they’re ready for a sacrament.”
“I think having three parishes work together is wonderful,” commented Tanya Ray, whose daughter, Sydney, made her first Communion last year and this year volunteered on the retreat for first Communion candidates and their parents at St. Ursula.
Ray volunteers, in sacramental preparation and other programs, opening more doors for her four children.
“That’s why I like the options,” she said.
Father Stephen Hook, pastor of St. Ursula, commented on the ease at which the three parishes aligned their first Communion and reconciliation preparations.
“We certainly try to collaborate where we can,” he said. “Sometimes, it’s not as easy as it seems on the surface, but this one was easy.”
That’s not to say the involved parties plan to quit while they’re ahead – they’ve already reached out to two more parishes to discuss growing the collaboration.