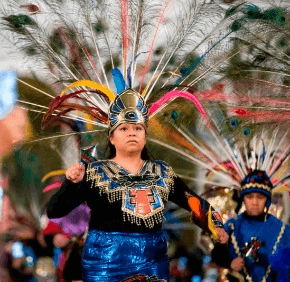 By Kelly Seegers
Catholic News Service
WASHINGTON – People on the sidewalks of Washington momentarily stopped their holiday shopping and paused in the cold Dec. 10 to take in the sight of hundreds of pilgrims processing through the streets alongside images of Mary.
One procession began at the Shrine of the Sacred Heart and another at Holy Name Church, and the two converged together to attend Mass at the Basilica of the National Shrine of the Immaculate Conception for the feast of Our Lady of Guadalupe, the patroness of the Americas. Her actual feast day is Dec. 12.
The annual “Walk with Mary” event brings together people of all ages and backgrounds, but it is a particularly special event for the Hispanic Catholic community. The apparition of Our Lady of Guadalupe, which is commemorated during her feast, took place in 1531 in present-day Mexico.
Mary appeared to a poor peasant named St. Juan Diego, and asked him to tell the bishop to build her a church on Tepayac Hill in what today is Mexico City. When the bishop did not believe his story, Mary showed Diego roses blooming on a spot where no flowers grow. He gathered them up in his cloak, or “tilma,”and took them to the bishop as a sign of Mary’s apparition. As the roses fell, an image of the Mary appeared miraculously on the cloak. His cloak is preserved in the Basilica of Our Lady of Guadalupe near the site.
During the Dec. 10 Mass, dancers dressed in traditional Aztec clothing re-enacted the miracle of the roses. They processed down the main aisle and around the church to the accompaniment of drums, and at the end of the procession, one man presented Washington Cardinal Donald W. Wuerl, who was the main celebrant of the Mass, with a tilma given to the archdiocese by the Convent of the Perpetual Adorers of the Blessed Sacrament in the city of Morelia in Michoacan, Mexico. Cardinal Wuerl knelt down to kiss the image of Mary, which was hand-embroidered on the tilma by the sisters.
Monica Ulloa, who was walking in the procession with her husband, Milton, had traveled to Mexico in July to see the original image of Our Lady of Guadalupe, which she said “strikes your soul so deep.” She was attending the walk to continue her devotion to Mary.
“She brings different cultures together and different languages,” Ulloa told the Catholic Standard, Washington’s archdiocesan newspaper. “We all become one with Our Lady.”
The couple is a part of Mision San Andres at the Cardinal McCarrick Center, where Milton Ulloa teaches confirmation preparation. He made it a requirement for his students to attend the walk, so they “do not just learn in the classroom,” but get to see faith being practiced out in the world. While they may forget what they read in their textbooks, he said, “they’ll always remember this moment” of seeing people gathered to witness their faith.
Throughout the roughly two-and-one-half mile walk from the Shrine of the Sacred Heart to the basilica, many participants carried images of Mary that they brought from home or from their parish. A truck drove along with a Marian image on top, and another truck carried musicians playing music for the participants to sing along with. In between songs, participants would pray decades of the rosary together in Spanish.
Parishioners of Our Lady Help of Christians in Waldorf, Maryland, were among those gathered for the walk. The parish’s pastor, Father Alain Colliou, is originally from France, and said the walk was a way to show “it doesn’t matter what country we come from. … We are all one people, all sons and daughters of God.”
Marlen Coles, the youth and evangelization coordinator at Our Lady Help of Christians, said she grew up in southern Texas, often going to processions like this one, and she saw it as “an opportunity to share our faith as we go down the streets and unite in prayer.” And for many participants, it is a way to express their faith and their culture at the same time.
“For many families who live so far away from their country, it is a great way to be reunited with their culture,” she said.
Maria Lam, a parishioner of Our Lady Help of Christians, moved to the United States from Guatemala seven years ago because she feared for the safety of her children. During the walk, she said she was seeking the intercession of Our Lady of Guadalupe to “change the heart” of President-elect Donald Trump, so she and others did not once again have to fear for the future of their families.
During the election campaign, Trump said anyone who enters the United States illegally is subject to deportation. He also pledged to build a wall on the country’s border with Mexico.
In his homily that he delivered in Spanish, Washington Auxiliary Bishop Mario E. Dorsonville acknowledged the concern that many people gathered for the procession were feeling, saying that it is a difficult moment in our nation’s history for the immigrant community. But he reminded the thousands gathered that Jesus is always with them and his mother is always close by.
As he concluded the main portion of his homily, Bishop Dorsonville shifted to addressing those who could not understand Spanish.
Speaking in English, he said: “The main message I would like to put in your hearts” is “we are ending a Year of Mercy, but that doesn’t mean mercy is going to be out of our hearts. … There is always a way to say, ‘Yes, Lord, make me an instrument of your peace and love.’”

From Mexico to Dundalk to Manhattan, Guadalupe runners carry torch for faith, immigrants