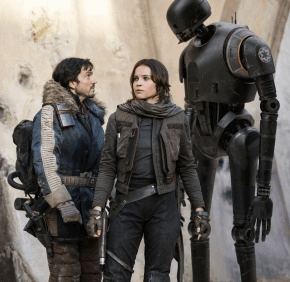 By Christopher Gunty
editor@CatholicReview.org
The latest addition to the Star Wars universe shows us new, visually different worlds from those we have seen in the previous installments. “Rogue One: A Star Wars Story” delivers an impressive rendering of a heretofore missing piece of the puzzle that opens the original movie in the series, what we now know as “Star Wars, Episode IV: A New Hope.”
Galen Erso (played by Mads Mikkelsen), a scientist who had misgivings about his role in developing the weapon that will become known as the “Death Star,” eludes the empire for many years until he is found and re-conscripted into service to complete the weapon. His young daughter escapes the clutches of the imperial jackboots, and prefers to assume her father is dead, rather than think he is actively helping the oppressors.
His daughter, Jyn (Felicity Jones), grows up under an assumed name, living under the radar to avoid the empire. The rebel alliance finds her and kidnaps her, hoping she will provide an introduction into the stronghold of Saw Gerrera (Forest Whitaker), who has received a message allegedly smuggled from Galen.
As “Rogue One” is set just before “A New Hope,” it evokes the same sense of time and space. When we see the cities, spaceports and rebel bases, the scene is gritty and dirty, as expected for a ragtag bunch. Certain elements feel a lot like the cantina at Mos Eisley, the rough-and-tumble bar in Episode IV where we first meet Han Solo and Chewbacca. Meanwhile, on the imperial bases and ships, all is clean and orderly. Even so, we are meant to sympathize with the shabby and downtrodden underdogs.
This film is not a sequel or prequel to the seven films already released (with two more planned). Though it happens “a long time ago in a galaxy far, far away,” it is tangential to the rest of the story arc we know. There are, however, touch points between the stories. (In a similar way, short story book anthologies “Tales from the Mos Eisley Cantina” and “Tales of the Bounty Hunters” look at events in the Star Wars universe from a variety of characters’ perspectives, all touching on a specific scene. The diverse viewpoints remind us that whatever we experience is perceived differently by others and matters differently to them, as well.)
We reconnect with some characters – some we love and some we hate – from the existing canon. For example, Jimmy Smits returns as Sen. Bail Organa, foster father of Princess Leia. We also meet new heroes and villains in this latest iteration.
Newcomer Rebel Capt. Cassian Andor (Diego Luna) has been part of the struggle against the empire since age 6. He reminds Jyn that she is not the only one who lost everything, adding, “Some of us decided to do something about it.”
We also meet temple seer Chirrut Îmwe (Donnie Yen), who though physically blind, is able to sense his surroundings with the help of the Force. Chirrut’s faith in the power that binds all livings things is shown through his mantra, “I am one with the Force. The Force is with me.” His zeal, originally scoffed at, becomes missionary fervor.
Impertinent and flippant robot droid K-2SO (Alan Tudyk) is a perfect counterpoint to the fastidious and persnickety C-3PO (who makes a cameo appearance).
Director Gareth Edwards interlaces a multitude of characters with beautiful cinematography (Grieg Fraser), providing a new take on the galaxy with several nods to the familiar. Edwards’ film is forebodingly gloomy with leitmotif of lighthearted humor. The musical score by Michael Giacchino has hints of John Williams’ original scores without directly quoting the themes of the previous films, except in a couple instances.
Though galactic mysticism has hints of New Age theology, the Force and the way in which its adherents “pray” are shown in a favorable light. These disciples of the Force encourage new disciples more by example than by preaching; this is a message that Catholics should understand as well.
“Rogue One” is well worth the view – and so full of characters and other visual elements that perhaps more than one viewing is advisable to experience it all.
The film contains much stylized violence, with rebels and stormtroopers alike shot and blown up. No nudity or profanity. MPAA rating is PG-13 for extended sequences of sci-fi violence and action; The Catholic News Service classification is A-II – adults and adolescents.