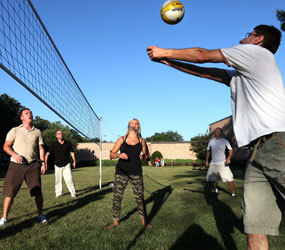 CHICAGO – At a Champaign pizzeria in the spring of 1981, a youthful Tim Leeming pulled Father Jack Wall into a private conversation and offered an impromptu confession.

“Father, I’m doing well here at school academically and socially, but I don’t know why I’m doing the things I’m doing and it seems to me that my faith should be a resource,” the University of Illinois student told the priest.

That modest, innocent conversation set in motion a whirlwind of events that would spark a young adult ministry revolution – first in the Chicago area, then the nation and now the world.

When Father Wall and his colleagues from St. James returned to the Arlington Heights parish from their campus visit, the group sat down to establish a forum for the deep-rooted questions young adults such as Leeming had. Father Wall’s team proposed a summer program – five evenings on five spiritual themes – hoping the series would help draw young adults closer to God.

Someone casually tossed out the title “Theology on Tap,” a name that survives today as the program enters its 30th year in the Archdiocese of Chicago and introduces itself to the worldwide stage.

When Theology on Tap hosted its first event at St. James Parish in June 1981, 200 college-age guests attended. Immediately, the organizers noted the series’ promise and, even more, the introspective, spiritual elements it inspired.

“We could see right away that this was touching a need. The room was filled with an amazing balance of social energy and theological input,” Father Wall said.

Theology on Tap surged forward in the summer of 1981. On the program’s second night, more than 400 attended. The question then became: Now what?

“The best ideas have a simplicity to them and Theology on Tap is like that. It was adaptable and readily replicable and people jumped on board,” Father Wall said.

Father John Cusick, one of Theology on Tap’s original five speakers, noted the program’s energetic response and impact with an oft-overlooked group. Heading the archdiocese’s office for young adult ministry, Father Cusick envisioned dioceses across the country holding similar programs and began planting seeds for that transformation. He and his staff, including longtime associate Kate DeVries, began crafting a more formal program and inviting other dioceses to replicate the series.

In 1994, the Diocese of Joliet ran Theology on Tap. Later, the dioceses of Rockford, Gary, Ind., and Madison, Wis., and the Archdiocese of Milwaukee adopted the program. Father Cusick’s office, meanwhile, assembled a manual detailing best practices and presented a program to the U.S. Conference of Catholic Bishops in 2002. Regularly, the Chicago office was answering calls from other dioceses eager to establish Theology on Tap.

“When something is good, its momentum grows,” DeVries said. “The young adults responded, the parishes and dioceses responded, and Theology on Tap took off well beyond Chicago.”

By late 2003, Theology on Tap had outgrown its modest Chicago office and its even more ambitious vision. Father Cusick met with Renew International, an established faith formation organization based in New Jersey, to discuss folding Theology on Tap into their expansive outreach efforts, a partnership realized on Jan. 1, 2007.

Despite the program’s expansion into 48 states and seven countries, however, Theology on Tap remains a staple of Chicago’s young-adult office. Heading into its 30th year, 215 area sites have hosted nearly 4,200 programs. “We love it and want it to go on forever,” DeVries said.

While Theology on Tap has adopted a post-collegiate focus, it has not veered from its focus on young-adult concerns, chiefly vocational and relational issues. Using faith as the tool, the annual four-week summertime program offers an experience that invites individual introspection in an atmosphere of others exploring the same personal issues of career, love and a meaningful life. It’s offered in a casual environment with promises of food, drinks and socializing.

“The program keeps growing precisely because there is a spiritual hunger in our young adults and an absence of places to feed that hunger in today’s world. Theology on Tap is the answer to this,” DeVries said.

Involved in ministry work during her high school and college years, Cynthia Kogol felt a faith void when she graduated from Loyola University. Struggling to find any spiritually rooted program that addressed her concerns as she entered a new phase in life, her parish priest directed her to Theology on Tap in 2009.

“It’s rewarding to be able to share my faith with others and gain a different perspective on issues, such as Mass and prayer,” the 27-year-old LaGrange resident said.