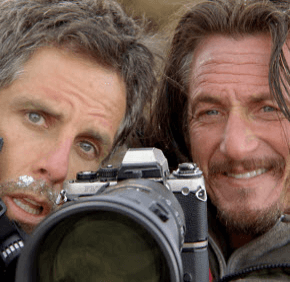 NEW YORK – “The Secret Life of Walter Mitty” (Fox) receives its title, the name of its main character and his principal attribute – a tendency to engage in extravagant daydreams – from a classic 1939 short story by humorist James Thurber. But there the similarities pretty much end.

This is the second time Thurber’s wry yarn – itself too brief, perhaps, to be adapted for the screen as anything but a short film – has been made into a feature that retains little resemblance to its source material. In 1947, Thurber’s work was given the golden-age Hollywood treatment by director Norman Z. McLeod – and emerged as a song-and-dance vehicle for Danny Kaye.

Turning to the new version, helmed by and starring Ben Stiller, it’s hard to say what we have. This strange blend of comedy, drama and travelogue is, by turns, claustrophobic and sprawling, puerile and sweetly emotional. Early scenes showcase humor about awkward workplace situations and executive bullies; later ones present a serious study in self-realization.

At least the outline of the plot is fairly easily sketched: Soft-spoken, office-bound photo editor Walter Mitty (Stiller) takes great pride in his work for a fictionalized version of Life magazine, a publication whose credo, inscribed on a lobby wall, he has learned by heart. But otherwise his existence is so mundane that he frequently escapes into fantasies. These often revolve around his imaginary romance with Cheryl Melhoff (Kristen Wiig), the fetching co-worker for whom he secretly pines.

When a crucial negative sent in from the field by Life’s leading photographer – and Walter’s idol – Sean O’Connell (Sean Penn) goes missing, Walter is facing unemployment unless he can recover it. Thus begins a series of globetrotting expeditions that will transform Walter’s delusions of grand adventure into reality.

One of the movie’s most enjoyable subplots charts Walter’s interaction with recent divorcee Cheryl’s teen son, Rich (Marcus Antturi). A former skateboarding whiz, Walter gains Rich’s attention and respect by giving him skating tips, and later brings him back an appropriate memento from one of his far-flung journeys. When circumstances suggest a possible reconciliation between Cheryl and her ex, moreover, Walter respectfully steps back from his timid wooing of her.

At the other end of the emotional spectrum lies Walter’s caricatured relationship with Ted Hendricks (Adam Scott). This locker-room bully of an executive has no patience for his easily abashed subordinate’s woolgathering. Yet he holds Walter’s professional future in his callous hands. In fact, Ted is such an irksome overgrown adolescent that Walter imagines various forms of revenge against him ranging from a crushing insult to a violent beating.

To the degree that the unstable proceedings have a moral core, it can be found in Sean. Mellow, weather-beaten, appreciative of nature and of Walter’s steady, self-effacing work behind the scenes, Sean is part New Age guru, part dispenser of social commentary on behalf of the unsung 99 percent.

Indeed, the satisfaction viewers derive from this shape-shifting movie – which, although not suitable for teens, involves relatively little that would be problematic for adults – will depend in large part on how much they share Walter’s admiration for Sean.

Those who don’t can always curl up at home for a profitable half hour or so reading – or rereading – Thurber’s masterwork. It’s a comic gem that, in all but name, has yet to be set against the backdrop of the silver screen.

The film contains brief but harsh violence, at least one use of profanity and a few crude and crass terms. The Catholic News Service classification is A-III – adults. The Motion Picture Association of America rating is PG – parental guidance suggested. Some material may not be suitable for children.