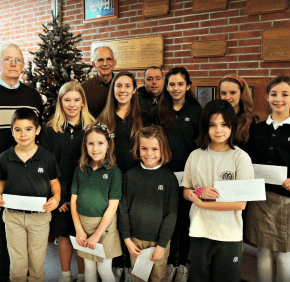 Fifteen Calvert Hall students have been recognized for their vocal and instrumental abilities.

These students participated in the school’s annual Christmas concert Dec. 13, which featured the Madrigal Singers, Chamber Singers, The Corridors and The Hallmen, and the Jazz Orchestra, String Ensemble and Combined Concert Band.

Nine students from Mother Seton School recently received awards from the Knights of Columbus Brute Council No. 1860 in Emmitsburg for their entries in the Knights’ annual “Keep Christ in Christmas” poster contest.

The Knights introduced the poster contest as a way to encourage youths to use their creative talents to express the true, spiritual meaning of Christmas, according to the Emmitsburg school.

Students from the Baltimore school raised more than $800 to fund the meal, which was served Nov. 28 at Curley, according to the school.

Loyola University Maryland has been awarded a $500,000 Challenge Grant from the National Endowment for the Humanities to support Messina, the Baltimore institution’s program to help first-year students adjust to the academic rigor of college and build a foundation for success, the university announced.

The grant will fund a new faculty position in a humanities discipline, along with the development of programming that will be integrated in the Messina experience for first-year students, according to the university.

“This award is an external affirmation of one of Loyola’s most important initiatives,” said Douglas Harris, faculty co-director of Messina and associate professor of political science, in a statement. “Such a prestigious honor is the kind of thing that you would expect of an institution that strives be to the nation’s leading Catholic, comprehensive university.”

About one-third of Loyola’s current first-year class is participating in Messina, according to the university. The program will include all first-year students beginning in fall 2015, and the new faculty member funded by the NEH grant is expected to arrive that semester.

“The funding is critical because Messina programming brings the world of the humanities closer to the first-year student experience,” said Michael Puma, Messina’s student development co-director, in a statement. “In the big picture, NEH has given us a great public vote of confidence in what we knew personally and what is widely known on campus – that Messina is a tremendous demonstration of collaboration, vision and creativity. This certainly strengthens our future.”

Loyola is one of five universities and nine institutions to receive a $500,000 grant, the highest increment awarded, according to the university.

Monsinor Miller, ‘mountain of a man,’ laid to rest