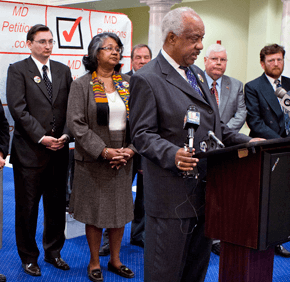 By George P. Matysek Jr.
gmatysek@CatholicReview.org
ANNAPOLIS – Leaders of a petition drive to bring the recently passed same-sex marriage legislation to referendum expressed confidence they will collect more than the nearly 56,000 needed signatures to put the issue on the November ballot.
“You are going to find that in just a few short weeks, we are going to turn in not only the signatures,” said the Rev. Derek McCoy, leader of the Maryland Marriage Alliance, “but, ultimately, we are going to uphold (traditional marriage) for the citizens of Maryland.”
Rev. McCoy joined several members of the House of Delegates during a mid-day Feb. 29 press conference in Annapolis outlining the goals of the petition drive.
The Maryland Marriage Alliance, which has partnered with the Maryland Catholic Conference, filed a petition with the Maryland Board of Elections Feb. 24 to be the official proponents of the referendum campaign against the same-sex marriage legislation. Its website, marylandmarriagealliance.com, will become the official site to obtain petitions for the referendum.
Del. Neil Parrott of Washington County, a traditional-marriage advocate, said his mdpetitions.com site will also direct visitors to the Maryland Marriage Alliance site to sign the petition.
Maryland citizens will stand up against same-sex marriage, Rev. McCoy said, because they recognize the “intrinsic, fundamental value to society” of maintaining the definition of marriage as being between one man and one woman.
The Maryland Marriage Alliance will be working in churches, synagogues, mosques and other grassroots organizations to promote the petition drive, Rev. McCoy said, with Catholic parishes expected to be heavily involved in the campaign through the Maryland Catholic Conference.
Rev. McCoy noted that out-of-state supporters of same-sex marriage have already poured more than $500,000 into their lobbying efforts, and that they will spend more to promote gay marriage before the expected referendum.
“We know that they are going to throw a lot of money at it,” Rev. McCoy said, “and we’re going to respond appropriately.”
Baltimore City Del. Cheryl Glenn noted that slots went to referendum in Maryland several years ago and so should gay marriage.
“I am supporting the petition drive because I have been overwhelmed from the very beginning of this issue from my constituents – calls, e-mails, letters – begging me to support traditional marriage between one man and one woman,” she said.
Last year, a bill legalizing same-sex marriage passed in the Senate, but was returned to committee in the House of Delegates when there were not enough votes for passage. Gov. Martin J. O’Malley, who sponsored a similar bill this year, helped win its passage in the House and Senate. He was expected to sign the measure into law March. 1.
In an interview with the Catholic Review, Del. William Frank of Baltimore County said the governor “pulled out all of the stops and used the full weight of his office to pressure many, many people into changing their votes from last year.”
“I think we are going to win because the majority of people in this state believe in traditional marriage,” Frank said, “and, that cuts across all demographic lines and all racial lines and all geographic lines.”
Frank said money will be needed to fund television ads educating voters on the issue.
“I’ll be active in helping to raise money for the cause,” he said.
View this audio slideshow  by Tom McCarthy Jr.
PrevNext