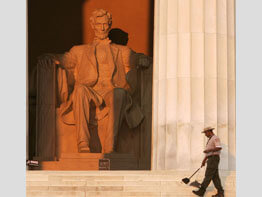 With the 200th anniversary of his birth on Feb. 12 neatly following the inauguration of Barack Obama, the nation’s first black president, Abraham Lincoln remains very much in the public eye.

Memorialized on Mount Rushmore, the penny and along the Potomac River, the “Great Emancipator” came to be viewed as one of the nation’s towering presidents – but only after being martyred by an assassin.

Lincoln’s presidency had been vilified in Maryland, where priests had owned slaves and the publishers of The Catholic Mirror, a predecessor of The Catholic Review, were jailed for anti-Lincoln sentiments.

The Catholic Mirror had come to defend the faith in an era when the Know Nothing Party had vehemently opposed it, and when newspapers were to bombast and partisanship what talk radio and the Internet are today, with soap operas, in the form of serialized fiction, dominating page 1.

While its masthead listed it as the “Official Organ of the Most Rev. Archbishop of Baltimore, and Rt. Rev. Bishops of Richmond and Wheeling,” the Catholic Mirror was privately owned.

“It was not an archdiocesan paper,” said Father Michael J. Roach, the chair of the Church History Department at Mount St. Mary’s Seminary in Emmitsburg. “The pro-Confederacy position of the paper was an embarrassment to the hierarchy.”

Lincoln was elected the 16th president on Nov. 6, 1860. Three days earlier, an editorial in The Catholic Mirror made its position clear as the nation, on the precipice of the Civil War, debated slavery and states rights:

“What true American could be insane or vicious enough to arrest his country’s march to greatness by destroying her unity, its very first element? … We think that all Americans who are true to their whole country should oppose the election of Lincoln, because the policy of his party is dangerous to the Union.”

On page 6 in its Nov. 10 issue, The Catholic Mirror reported the results of the election, in which Lincoln won 180 electoral votes, double the number of the next closest candidate. In Maryland, however, he received fewer than 2,300 votes of more than 92,000 cast.

After digesting the election, The Catholic Mirror on Nov. 17 editorialized:

“What is the evil done by the election of Mr. Lincoln? … For the first time in the history of the country, we have to record an election to the Chief Magistracy of this government a man who stands out as the exponent of an aggressive policy against the social institutions and political interests of the South.”

In that same issue, The Catholic Mirror printed the inaugural speech of Baltimore Mayor George William Brown, who had taken office Nov. 12, 1860.

“A period of great prosperity appeared to be opening for this city,” Mayor Brown proclaimed, “but the prospect has been suddenly clouded by the effect produced on some of the Southern states by the recent Presidential election.”

In short order, the Civil War began, Lincoln suspended the writ of habeas corpus (protection from being unjustly imprisoned) in Maryland and began jailing dissenters.

According to Kenneth J. Zanca, a professor of religious studies at Marymount College in Palos Verdes, Calif., and author of two books on the era, those arrested included Mayor Brown, 31 members of the state Legislature, the editors of two “southern-leaning newspapers: the Exchange and The South,” and the men who ran The Catholic Mirror.

In “Baltimore’s Catholics and the Funeral of Abraham Lincoln,” for the Maryland Historical Magazine’s spring 2003 issue, Mr. Zanca wrote:

“In October 1863 and again in June 1864, Lincoln’s War Department arrested the publishers of The Catholic Mirror, Michael J. Kelly and John B. Piet. The first arrest was for printing works of ‘treasonable character,’ and the second for selling a pamphlet critical of political arrests. … The publication of the paper was suspended.”

The battle of Gettysburg raged as July dawned in 1863. On July 8, according to the “The Premier See, A History of the Archdiocese of Baltimore, 1789-1994” by Xaverian Brother Thomas W. Spalding, Baltimore Archbishop Francis Patrick Kenrick “was found dead in his bed, the apparent victim of a heart attack.”

Archbishop Martin John Spalding became head of the Baltimore See on May 6, 1864.

“Spalding was a good man who released nuns and priests to serve both the North and the South,” Mr. Zanca said in a telephone interview, “but on ideology, he was a man of the South. He grew up with slavery.”

A month later, Lincoln was nominated for a second term at the Republican national convention – in Baltimore.

In his 1989 history of the archdiocese, the late Brother Spalding wrote that Archbishop Spalding “saw to it that when Lincoln’s body passed through Baltimore on April 21 some 150 priests and seminarians joined the procession. He, however, would visit a remote part of the archdiocese.”

“Catholics at the time,” Mr. Zanca said, “felt the heat of anti-Catholicism.”