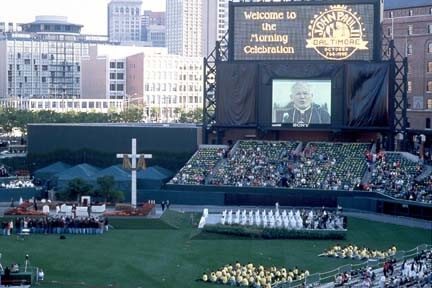 Pope John Paul II visited Baltimore during his Papal Visit to the United States in October 1995.

Slide Show of Papal Visit
View our slideshow of images taken during the Papal Mass at Oriole Park at Camden Yards as well as other places in which the Holy Father addressed the faithful of the Archdiocese of Baltimore.

The Holy Father recalls the past achievements of the Church in the United States and challenges today’s Catholics to engage in the new evangelization with increased vitality and courage. Because democracy demands a commitment to certain moral truths about the human person and human society, His Holiness encourages America’s Catholics to let their faith illuminate their contribution to the future of their country.

In this written message, the Holy Father acknoledges the work of Catholic Relief Services as an important expression of the Church’s rich tradition of social doctrine. Inspired by respect for the dignity of each individual and the need for social solidarity, C.R.S. can bear concrete witness to the Church’s teaching on the moral and religious implications of political, economic and social life.

Address at the Cathedral of Mary Our Queen

At the Cathedral of Mary Our Queen, the Holy Father entrusts to Mary the results of his visit to the United Nations and his pilgrimage to the Church in Newark, Brooklyn, New York and Baltimore. He acknowledges the continuing importance of America’s tradition of religious freedom and offers words of encouragement to all committed to serving the poor and defending human life and dignity.

At the conclusion of his visit to the United States, the Holy Father expresses his gratitude to the American people. He calls upon America to remain true to its ideals of democracy as set forth in its founding documents and their vision of respect for the rights of the human person and for the dignity and sanctity of human life. Democratic government stands or falls with the moral truths which it embodies and promotes. His Holiness urges America to continue to serve the cause of justice, truth and human solidarity, to defend the culture of life and to put its trust in God.