Address at the Cathedral of Mary Our Queen

In this Cathedral of Mary Our Queen, in the final hours of my visit, I entrust the results of my presence at the United Nations and my pilgrimage to the Church in Newark, Brooklyn, New York 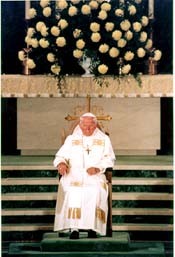 and Baltimore to the intercession of the Mother of the Redeemer. I warmly greet you all, in particular Cardinal Keeler, pastor of this local Church. Through the representatives of the 162 parishes, and of the various Archdiocesan organizations and agencies, I greet the whole Catholic community.

I extend the hand of friendship to the members of other Christian communities and to the Jewish and Muslim guests, as well as to the representatives of the universities and colleges in the Baltimore area, and to the federal, state, and local public officials present.

Maryland holds a special place in the history of American Catholicism, indeed in the religious history of the nation. It was here that religious freedom and civic tolerance were enshrined in the American experience, just as in recent times Maryland has been a pioneering area in ecumenical and inter-religious dialogue.

Today, religious tolerance and cooperation among Americans cannot simply be a pragmatic or utilitarian undertaking, a mere accommodation to the fact of diversity. No, the source of your commitment to religious freedom is itself a deep religious conviction. Religious tolerance is based on the conviction that God wishes to be adored by people who are free: a conviction which requires us to respect and honor the inner sanctuary of conscience in which each person meets God. The Catholic Church wholly supports this conviction, as the fathers of the Second Vatican Council proclaimed in the historic Declaration on Religious Freedom.

The challenge facing you, dear friends, is to increase people’s awareness of the importance for society of religious freedom; to defend that freedom against those who would take religion out of the public domain and establish secularism as America’s official faith. And it is vitally necessary, for the very survival of the American experience, to transmit to the next generation the precious legacy of religious freedom and the convictions which sustain it.

Catholic education has left a lasting imprint on your community, from the days of St. Elizabeth Ann Seton to the present. I am confident that all of you; Bishops, priests and people of the Archdiocese of Baltimore understand the importance of continuing, indeed of expanding, that eminent tradition of Catholic education, in your parishes, your high schools, your colleges and universities. Catholic schools, historically and as a matter of duty, have made a substantial contribution to society by giving special attention to economically disadvantaged segments of society. I hope that you will continue to look for ways of ensuring the continuation of this essential service, despite the financial burdens it entails. Catholic education serves the future of all Americans, by teaching and communicating the very virtues on which American democracy rests.

Other forms of Catholic education have become a notable feature of the life of this local Church: the extensive programs of religious education for children in public schools; your work in adult catechesis, as in the renew program; the Emmaus program and other programs of continuing education for priests. I encourage you in all of these efforts and I urge you to look to the Catechism of the Catholic Church as a sure guide in conforming such programs to the one, Holy, Catholic and Apostolic faith.

To the members of the various Christian denominations present, may I say that, as we approach the Third Millennium and the great jubilee of the year 2000, we must all the more earnestly strive to heal the wounds of the past. I encourage everyone to strengthen and extend the evumenical dialogue that has been for so long a hallmark of this community. We need to explore together how we might present ourselves before the Lord as a people solidly on the road to the unity for which Christ prayed on the night before he gave his life for our salvation.

To all believers in the one true God I express the respect and esteem of the Catholic Church. As I said at the United Nations, the world must learn to live with “difference,” if a century of coercion is to be followed by a century of persuasion. I assure you, dear friends, that the Catholic Church is committed to the path of dialogue in her relations with Judaism and Islam, and I pray that, through that dialogue, new understanding, capable of securing peace for the world, may be forged.

You have shown in this community how dialogue and cooperation can lead to improvements in civic life: in the work you have done together to promote the teaching of moral values in the public schools, and in providing housing for the poor. May that work be blessed, and may it increase, as your dialogue of faith deepens in the years ahead.

In the Gospels, Jesus presents himself as one who serves. The Church, too, which is the body of Christ, is a servant Church, accompanying suffering humanity on its pilgrim way through time. The work of Catholic Relief Services and Catholic Charities here in Baltimore bears witness to that commitment to service. I wish to thank these agencies for their work, and I encourage them to expand their outreach even as they deepen their Catholic identity, formed by Catholic social doctrine.

Our commitment to the dignity and value of all human beings is the reason why the ecclesial community establishes such things as soup kitchens, provides shelter for the homeless and medical care for the poor, counsels those addicted to drugs and alcohol, and helps people to participate more fully in the life of society. When Cardinal Lawrence Shehan of Baltimore publicly defended the civil rights of African- Americans almost 30 years ago, he was expressing a moral truth about the equal dignity before God of all human beings. The same conviction leads his successors and should compel all of you today to defend the right to life of every human being from conception to natural death, to care for and protect the unborn and all those whom others might deem “inconvenient” or “undesirable.” That moral principle is not something alien to America, but rather speaks to the very origins of this nation!

Dear brothers and sisters, dear friends: The world looks to America in the hope of finding a model of a free and virtuous society. To make this land of freedom a hospitable home for all its people is still a challenge, and increasingly so. It is important to peoples around the world that you, citizens of the United States, succeed in making American society a more perfect embodiment of its commitment to liberty and justice for all.

God bless all of you.
God bless America.
Thank you.