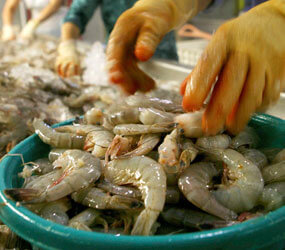 WASHINGTON – A priest who oversees a Catholic ministry to people who make a living from the sea said consumers should know that shrimp in Texas has not been tainted by the massive oil spill in the Gulf of Mexico and urged them to support the local seafood industry.

But he also expressed deep concern for those in neighboring states whose livelihoods are being damaged by the man-made disaster.

“If people want to be proactive and directly help the fishermen, (they should) make a conscious effort to buy wild-caught Gulf shrimp,” said Father Sinclair Oubre, diocesan director of the Apostleship of the Sea for the Diocese of Beaumont, Texas. “Buying and requesting shrimp caught in Gulf-coast areas will be a big help.”

“If the spill is not handled properly, there would be a collapse of the fishing community surrounding the Gulf,” he said.

The priest made the comments to Catholic News Service in a telephone interview soon after he and other representatives of groups that work with fishermen held a news conference in early June in Port Arthur, Texas, one of the largest fishing ports in the state.

They came together to encourage the public to continue to support Texas fishing families by buying seafood, noting that “high quality seafood” continued to be harvested in 63 percent of the Gulf waters.

Besides Father Oubre’s office, other groups represented at the news conference were the national office of the Apostleship of the Sea; Port Arthur Area Shrimper’s Association; Port Arthur International Seafarers’ Center; CDM Consulting; and the Texas Cooperative Extension-Sea Grant.

The group noted that Texas fishermen have had economic struggles since 2001, because foreign farm-raised shrimp “were dumped on the U.S. market,” hurting the market for wild-caught shrimp.

Additionally, Gulf Coast fishermen have suffered the effects of hurricanes Katrina, Rita and Wilma in 2005 and Hurricane Ike in 2008.

And while the oil had not tainted the waters worked by Texas fishermen, the groups’ representatives expressed concern that the spill would still affect the local economy by reducing fertile fishing grounds and affecting the reputation of the state’s seafood fish for being “clean, safe and delicious.”

That has already happened for Louisiana shrimpers, since the spill began April 20 after an explosion and fire on a drilling rig leased by BP. Since then, untold gallons of oil and gas have spewed into the waters of the Gulf. As U.S. government officials and company executives have tried to address the spill, President Barack Obama has declared a six-month moratorium on deepwater drilling.

Father Oubre has called on Catholics and “all men and women of good will” to stand in solidarity with the fishing communities already harmed by the spill.

In Texas, “our seafood is constantly being tested off boats,” said Doreen M. Badeaux, secretary general for the Apostleship of the Sea of the USA. “Efforts have been stepped up to make sure no affected fish or shrimp is making its way to the tables.”

Father Oubre, who was recently re-elected president of the U.S. apostleship, said it was important that people know that structures were in place to monitor the spill’s effects on the fishing industry.

Fishermen were utilizing the “smell test,” throwing fish or shrimp back into the sea if it smells like diesel fuel. Additionally, fishermen also were performing chemical tests on their catch once they return to the docks to ensure safe, quality seafood.

Terrie Looney, county extension agent for coastal marine and natural resources, also talked to CNS that structures watching the situation off the coast of Texas.

“Mostly it is a matter of monitoring, watching satellites, conducting beach patrols and flyovers, and analyzing samples brought in from the public,” Looney told CNS.

“We are constantly watching the water quality,” Looney said, “Right now, prevailing currents are everything, but the last report I received was that the oil was still 150 miles off the coast and heading east. However, a hurricane could change everything.”

Father Oubre told CNS he was in direct communication with Catholic Charities to help provide relief for affected fishing communities.

“Like farm communities, all around the coast there are fishing communities that need help to ensure that they are kept alive,” he said.

On June 1, Catholic Charities of the Archdiocese of New Orleans began distributing $1 million it received from BP for direct emergency relief for needy fishing families.

In a letter to all Apostleship of the Sea chaplains, pastoral team workers, colleagues and friends, Deacon Albert M. Dacanay, regional coordinator, wrote that more than ever they must follow their mandate “to provide pastoral care to the seafarers, the maritime workers and the people of the sea.”

The deacon, who is based in Ontario, urged them to be proactive in providing pastoral care, to pray for a resolution to the crisis and “to understand and act on the moral and ethical dimensions of the environmental crisis.”