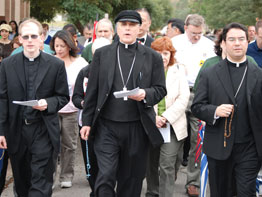 HUNTSVILLE, Texas – With nothing more to protect them from the elements than the “umbrella of life,” more than 800 Catholics gathered in Huntsville to take part in the first “Pilgrimage of Life” Nov. 24.

Dark skies and showers earlier in the morning didn’t dissuade those in attendance from participating in the mile-long rosary procession, which started at an abortion referral center and ended at Texas’ death-row facility.

The pilgrimage in the Archdiocese of Galveston-Houston was hosted by the Texas Catholic Conference as an effort to promote efforts to defend life from its inception to its natural end. Members from dioceses throughout the state were present, including the Archdiocese of San Antonio and the dioceses of Tyler, Dallas and Fort Worth.

The day began with a special Mass celebrated at St. Thomas the Apostle Church by Cardinal Daniel N. DiNardo of Galveston-Houston and concelebrated by Auxiliary Bishop Oscar Cantu, of the Archdiocese of San Antonio, as well as about 10 priests.

Chief among all pro-life efforts are those to protect the unborn, Cardinal DiNardo explained.

“We know that the announcement of the good news that a child is born at the beginning of the Gospels of Matthew and Luke is not only a reflection on the birth of Jesus, though it is that,” Cardinal DiNardo said. “It is reflection on the conception and birth of every human being.

“There is nothing more innocent than innocent human life at its beginnings. Therefore a claim is made on us for the protection of all human life; most especially that most delicate, brilliant and yet frequently violated human life through the act of abortion,” Cardinal DiNardo continued.

The Catholic Church and its members are “absolutely committed” to the eradication of abortion, Cardinal DiNardo said. The way to show that commitment is through prayer, he added.

“(We must) beg the Lord to transform first our hearts and then the hearts of all this culture by prayer and persuasion to respect this human life,” Cardinal DiNardo said.

The Catholic Church also opposes the death penalty, because at the core of the issue is the same basic question as abortion: the dignity of the human person.

“We are also in Huntsville today in another dimension of the pro-life movement which is guilty human life,” Cardinal DiNardo said. “For the last 25 or 30 years the bishops of Texas have quietly tried to persuade, argue and explain to the people of this state and beyond that in fact what is exercised as the death penalty is frequently unjust.”

Cardinal DiNardo said that while every effort must be made to be attentive to the victims of violent crimes, we must “find means of justice” that are less vindictive and support the dignity of the human person in these situations, too.

Again, Cardinal DiNardo urged those present and all people of good will to pray.

“None of this is easy, friends. If we thought that we would do it by pure human means then we would be as St. Paul says the most pitiable of all,” Cardinal DiNardo added.

The sponsor of the day’s events, the Texas Catholic Conference, is the public policy arm of the state’s Catholic bishops.

The conference “works on issues across the life spectrum,” explained Jennifer Carr-Allmon, the conference’s associate director. “Everything that we are here praying for today is the issues that we deal with on a daily basis in our advocacy efforts at the Capitol (in Austin).”