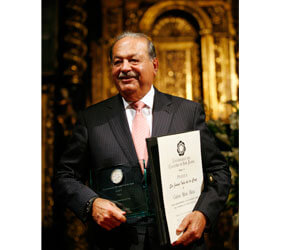 MEXICO CITY – President Felipe Calderon inaugurated the new Plaza Mariana Oct. 12 adjacent to the Basilica of Our Lady of Guadalupe, but credit for rescuing the project from budgetary and political problems went to the world’s richest man, Mexican telecom tycoon Carlos Slim Helu.

Slim donated about $52 million and had his construction company work on the project, completing it in 16 months, the Mexico City Archdiocese said in a statement.

“We were without hope. We didn’t know how to continue this project that we had started,” Cardinal Norberto Rivera Carrera of Mexico City said at the inauguration in comments addressed to Slim. “Your sensibility, your great heart offered us your unselfish support so that this became a reality.”

Slim previously has promoted restoration projects in the Historic Center of Mexico City, which included renovations to the Metropolitan Cathedral of the Assumption of Mary. Cardinal Rivera also publicly recognized Andres Manuel Lopez Obrador, former Mexico City mayor who provided properties for locating vendors selling items outside of the basilica.

The Basilica of Our Lady of Guadalupe attracts about 20 million visitors per year – including daily pilgrimages by groups ranging from clowns to bikers to mariachis – making it one of the most visited religious sites in the world.

Millions make pilgrimages to the site in northern Mexico City every Dec. 12, when Mexico celebrates the feast of Our Lady of Guadalupe, the country’s patroness.

“We’re ‘Guadalupanos,’“ Calderon said during the inauguration. His comment was unthinkable for a Mexican president in past years given the country’s history of unpleasant church-state relations.

“For many Mexicans, the majority of Mexicans, Our Lady of Guadalupe is a sign of identity and of unity,” he said.

The inauguration also included Archbishop Christophe Pierre, papal nuncio to Mexico, and Mexico City Mayor Marcelo Ebrard, who has been at odds with Catholic leaders for social policies approved during his administration.

The inauguration marked the first time Calderon and Ebrard participated together in a public ceremony since Calderon took office in December 2006. Many in Ebrard’s liberal party still consider the president’s 2006 election victory over Andres Manuel Lopez Obrador to have been rigged.

The archdiocese has said Plaza Mariana will contain offices, meeting rooms, crypts, a museum and a shopping area featuring small merchants, many of whose businesses date back generations.

The archdiocese said the merchant area will be completely independent of the basilica and its operation overseen by the Gustavo A. Madero borough, where the plaza is located.

Vendors lining the streets leading to the basilica have been provided new installations for selling their wares, which increasingly include non-recognized figures, such as La Santa Muerte, or Saint Death, but have complained about the cost of rent and lack of easy access for customers.