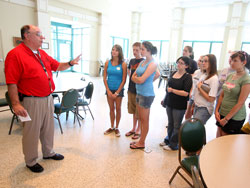 For many suburban children and teenagers, there is one Baltimore.

It’s the one with the Inner Harbor, the National Aquarium and Oriole Park at Camden Yards.

But, there are problem-plagued city neighborhoods that go unseen by them and their families as they quickly make their way in and out of the city via Interstate 95.

The overlooked Baltimore is the one civic-minded teenagers were exposed to July 5-11 through Justice Action Week, an archdiocesan program that seeks to awaken youths to the plight of the less fortunate.

“I really didn’t know anything,” said Sacred Heart, Glyndon, parishioner Jordan Oliver, who will graduate next year from Maryvale Preparatory School in Brooklandville.

“I’m a firm believer that this generation presents more opportunity than any other generation, in that they are more service-oriented,” said Ted Miles, Justice Action Week’s program director and the relationship manager of religious education at Catholic Relief Services.

“They’re more globally aware,” he continued. “Those are the kinds of kids we want to reach first and foremost, but we also want to try and reach those kids who are really not aware. You have those kids who already have the passion and then you want to ignite the passion in those who just don’t understand.”

Jordan planned on educating her friends and family after she returned home.

“They might pass that on to someone, and that’s the first step,” she said.

By the end of the 13th annual Justice Action Week, the participants saw how justice was administered and sometimes misused. They spoke with the homeless, an AIDS victim and saw a home where prostitutes find refuge.

The words “amazing” and “eye-opening” were commonplace among teenagers like Jordan, Alex Hermann and Kristin Moore.

“I was overwhelmed with a sense of compassion for them because I felt bad,” Kristin said. “I started to understand how these people are feeling, and that was really awesome.”

Kristin, a member of Church of the Resurrection in Ellicott City, said she was forced to revaluate her longterm goals after seeing the vacant, dilapidated homes that mark many of the city’s streets. She now wants to remake those homes for the poor.

The crop of teenagers participating in Justice Action Week found that they are a part of a legacy. They now have a commitment to the community, like Reagan Warfield, a former participant and current Mix 106.5 FM morning co-host.

“Justice Action Week was an incredible experience for me,” Mr. Warfield said. “The immersion program instilled in me a desire for peace and justice in the world. It also provided an eye-opening experience to me about Baltimore.

“In fact, I still think my love and appreciation for Baltimore stems from that week. By visiting charities like Chase Brexton (Health Services) and Our Daily Bread, as well as living in the Hamilton area for a week, I got to learn a lot about the city beyond the surface.”

Alex Hermann, a rising junior at Calvert Hall College High School, Towson, and a parishioner at St. Isaac Jogues, Carney, said his city-view is forever changed after being exposed to the growing Hispanic population and its needs in east Baltimore.

“I had to constantly remind myself that we were still in Baltimore,” said Alex, who moved here from Buffalo, N.Y., two years ago. “I’m definitely coming back with my friends and family.”