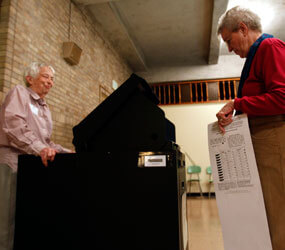 WASHINGTON – In a year when tax and budget issues dominated the ballot questions before voters, Catholic leaders offered the guidance of Catholic social teaching but generally remained neutral on specific referendum topics.

In states where the Catholic bishops took a strong stand on a ballot measure, however, voters seemed to generally follow the bishops’ advice.

Fifty-four percent of California voters rejected a move to make the state the first in the nation to legalize marijuana for recreational use. Although the California Catholic Conference remained neutral on the nine propositions before voters there, Bishop Salvatore J. Cordileone of Oakland presented several arguments against the marijuana question in an Oct. 22 commentary.

In Arizona and Colorado, the Catholic bishops had opposed a wide range of fiscal measures that they said could harm the state’s poorest citizens by cutting taxes or limiting the state’s ability to raise revenues. The proposals were rejected by solid margins. In Massachusetts, the bishops urged a “no” vote on an initiative to repeal a state law promoting the building of low-income housing. The initiative failed, with 58 percent of the voters against it and 42 percent in favor.

The only abortion-related question on the Nov. 2 ballot was in Colorado, where voters again rejected a proposed amendment that would have defined a human being from the moment of fertilization as a person under state law. Both in 2008 and in 2010, only 23 percent of Colorado voters supported the measure.

In a letter to pastors, the state’s bishops said they believed the “personhood amendment” strategy would not “provide a realistic opportunity for reversing” Roe v. Wade, the 1973 U.S. Supreme Court decision legalizing abortion, and would “divert valuable resources away from other more constructive efforts in defense of human life such as enacting a fetal homicide law or an ultrasound and informed consent law.”

The only other abortion-related question on the ballot in 2010 was a proposal in Alaska to require parental notification before a minor’s abortion. Voters approved it Aug. 24 by a 56 percent to 44 percent margin.

It would have required that the state hold a constitutional convention, and the Iowa bishops said such a convention would “allow Catholics and others to work for a marriage amendment to the Iowa Constitution.”

In Michigan, the Catholic bishops took the opposite stance on whether to hold a constitutional convention, primarily for fiscal reasons.

“The near $50 million cost of the convention would only present additional hardships for a state budget that is already in dire straits,” the Michigan Catholic Conference said. “State programs that provide necessary aid to the most vulnerable and destitute among us have experienced painful budget cuts in recent years, and any additional funding cuts would only further harm the health and safety of the state’s poor population that has suffered greatly throughout this decade’s recession.”

The bishops also acknowledged that a constitutional convention could be used “to eliminate Michigan’s marriage protection amendment that defines marriage as between one man and one woman.” That amendment was approved by voters in 2004.

In both Iowa and Michigan, two-thirds of voters rejected the proposed convention.

The bishops of Washington state had offered guidance to voters on several budget-related initiatives but did not offer specific recommendations on how Catholics should vote. Measures requiring two-thirds approval in the legislature for tax increases and ending the sales tax on candy, bottled water and carbonated beverages were approved, but a proposal to establish a state income tax for individuals earning more than $200,000 a year was defeated.

“The factors which have given rise to the proposed modifications and reforms of the current tax structure cannot be ignored,” the bishops said. “Yet the challenges before us are about more than economics. There is also an important moral component to them, which now more than ever cannot be overlooked.”

In his commentary on the California marijuana proposal, Bishop Cordileone said that “the ingestion of brain-altering chemicals – legal or illegal – cannot be categorized as good stewardship of our earthly lives.”

Proposition 19 would have made the cultivation, possession and personal use of limited amounts of marijuana legal under state but not federal law and would have allowed local governments to collect taxes on it. The cultivation and use of medical marijuana has been legal in California since 1996.

Bishop Cordileone said proponents of Proposition 19 made “a utilitarian appeal to the economics of the situation” by stating that “multiple billions of untaxed dollars of marijuana are sold illegally in our state while multiple millions of dollars are spent in enforcement of the marijuana prohibition.” But he called that reasoning “overly simplistic and off target.”