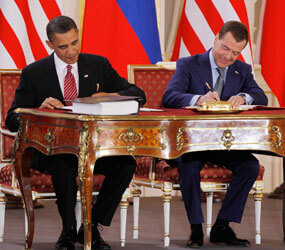 WASHINGTON – On the nuclear disarmament front, it sounds like the 1980s all over again.

Widespread discussion about nuclear disarmament has been in the news since April 2009, nearly 30 years after the U.S. bishops first adopted their pastoral letter on peace in the nuclear era, “The Challenge of Peace: God’s Promise and Our Response.”

The bishops and the Vatican have reiterated their calls to the world to end the dependence on nuclear weapons in war strategies time and again since the 1983 pastoral, but with little notice because the apparent threats seemed to diminish with the fall of the Soviet Union and growing partnerships with China.

As Maryann Cusimano Love, associate professor of international relations at The Catholic University of America, told Catholic News Service, “most people have the mistaken idea that these (weapons) went away with the Cold War.”

Recognizing that nuclear weapons still pose a significant global threat, the United States has embarked on a new effort to reduce strategic nuclear arsenals in the hope of making the world safer from mass destruction.

The most recent effort is being fueled by President Barack Obama, who in an April 5, 2009, speech in Prague, Czech Republic, offered his vision of a world free of nuclear weapons and subsequently set a course toward that goal.

At the time, the president called upon political leaders to move beyond Cold War thinking under which international politics was played out as a U.S.-vs.-Russia global chess match. The speech has been praised by disarmament proponents in political, military, activist and media circles since. Critics of Obama’s view have been few.

True to the vision he laid out, Obama has spent much of the last year working toward a new Strategic Arms Reduction Treaty, or START, with Russia. The START “follow-on” treaty was signed April 8 by Obama and Russian President Dimitry Medvedev.

Just before the treaty signing, the White House March 26 updated the country’s Nuclear Posture Review – only the third such document in U.S. history – which for the first time focuses on preventing nuclear terrorism and nuclear proliferation rather than targeting traditional rivals China and Russia.

Obama followed both by hosting the Nuclear Security Summit in Washington April 12-13, during which 47 countries agreed to work toward securing highly enriched weapons grade nuclear material within four years.

Next on the agenda – while not Obama’s doing – is the monthlong nuclear Non-Proliferation Treaty Review Conference, which opens May 3 at the United Nations. Signed by 189 nations, the treaty has been credited as a major success in preventing the spread of nuclear weapons to non-nuclear states since 1970.

“For people of faith, it means real progress for what the church has outlined for many, many years,” Cusimano Love said while calling for an outpouring of public support for such efforts, particularly the ratification of the new START pact.

“If we’re serious to approach this, it’s time for us to act,” Cusimano Love said. “If we stay silent, the status quo will remain with us.”

David Cortright, director of policy studies at the Kroc Institute for International Peace Studies at the University of Notre Dame, told CNS the treaty is a major step toward improved international relations.

“This is the Obama administration’s first effort to reset political/diplomatic relations with Russia and yield significant results,” he explained. “Signing the treaty is more important than the specific details of the treaty itself.”

Dave Robinson, executive director of Pax Christi USA, said he was pleased by the steps the Obama administration is taking in the pursuit of nuclear disarmament.

“They’re putting together a package of steps unlike the past,” Robinson said. “I take this as a genuine effort to move the (nuclear disarmament) agenda forward, to reduce the role these weapons play (in U.S. foreign policy).”

The treaty remains to be ratified by the Senate. That means getting at least eight Republicans to join the chamber’s 59 Democrats in voting for the pact.

Cortright said that while ratification may take awhile – perhaps a year or more – he believes the Senate will approve the new pact, which calls for a 30 percent reduction in the long-range strategic arsenals of the world’s two largest nuclear powers.

“It’s important that we give the example that we’re committed as the ones who have the most weapons to de-escalating our arsenal,” explained Bishop Howard J. Hubbard of Albany, N.Y., chairman of the bishops’ Committee on International Justice and Peace.

The Russian Duma also must approve the treaty, and from that point, both countries will have seven years to reduce their strategic arsenals to 1,550 weapons each.

Bishop Hubbard described the reductions as “a modest step” toward overall nuclear disarmament.

Even with the reductions, about 22,000 nuclear warheads – both deployed and stockpiled – will remain in both countries.

“We also think it is a very important step in the international effort to address the nonproliferation of nuclear weapons,” Bishop Hubbard told CNS. “With fewer nuclear weapons in the world, the likelihood of weapons falling into the hand of terrorists is less and will lead to the safeguarding of nuclear materials worldwide.”

As part of an effort to build momentum to ratify START, the USCCB prepared a study guide for parish groups and social ministry offices.

– A copy of a letter from Cardinal Francis E. George of Chicago, president of the U.S. Conference of Catholic Bishops, to the White House supporting START.

– An action alert for concerned Catholics to contact their senators urging ratification of the treaty.