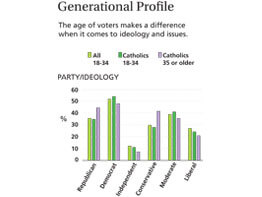 WASHINGTON – A survey on the political opinions of young Catholic voters shows that their views are similar to those of their peers on many issues in this year’s election, including abortion and same-sex marriage.

The survey was sponsored by Faith in Public Life, a resource center for justice and the common good, and was conducted by Public Religion Research. Other issues it covered were the economy, immigration, the environment, torture, employment nondiscrimination, religious liberty, and the role and size of government.

The opinions of 1,250 young Catholics and evangelicals ages 18-34 nationwide were gathered by interviewers over land-line and cell phones from Aug. 28 to Sept. 19. During the same time period and using the same method, surveyors also queried 2,000 adults over age 34. In releasing the results Oct. 8, the pollsters compared the answers given by the young adults to those given by the adults.

The margin of error for the national sample was plus or minus 2.5 percentage points.

The survey indicated that younger Catholics are less traditional than older Catholics. More young Catholics identified themselves as Democrats than as Republicans – 54 percent to 35 percent – whereas older Catholics were almost evenly split between the two political parties.

Only 28 percent of young Catholics said they are politically conservative, compared to 42 percent of older Catholics.

The survey showed that young Catholic voters are the most pro-government among voters of any major religious group, even more pro-government than other surveys show the rest of the young population is. Sixty-seven percent said that they prefer government play a larger role, offering more services to the public, compared to 41 percent of the older Catholics surveyed.

Of those surveyed Catholics had the highest support for government involvement of any religious constituency.

The majority of young Catholics, however, were less likely to believe that abortion or same-sex marriage were significant issues in this election.

However, a majority of most older and younger Catholics agreed that a candidate’s stance on abortion is not the deciding factor in their vote. More than half agreed that they would vote for a candidate who disagreed with them on abortion.

“As we go forward, expect to see young people across faiths focusing more and more on issues that reflect a concern for America’s image in the world and how our government treats the least of these at home and abroad. Expect to see the dividing lines of the culture wars continue to fade,” said Katie Paris, director of communications strategy at Faith in Public Life.