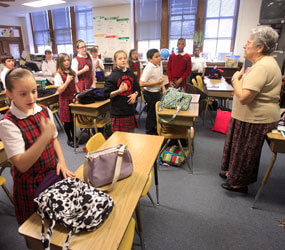 WASHINGTON – The constitutionally thorny question of where the line lies between a church school’s religious autonomy and the legal rights of its teachers comes before the Supreme Court Oct. 5, two days after the term starts.

Other cases on the court’s docket this fall include consideration of standards of indecency on network television and at least two cases over what activities warrant deporting immigrants.

Within the court’s first weeks, the justices also will decide whether to hear a challenge to Arizona’s immigration enforcement law. They also will consider whether to hear several other appeals of how immigration and asylum laws are applied and yet another in a series of challenges to the display of crosses in public places.

The church school case could have broad implications for other religious groups.

Cheryl Perich was an elementary school teacher at Hosanna-Tabor Evangelical Lutheran Church in Redford, Mich., in 2004 when she became ill with narcolepsy. When she prepared to return from disability leave more than six months later, the school asked her to resign, citing concerns about her readiness to work and the contract it had with her replacement teacher.

Perich threatened to sue under the Americans with Disabilities Act and the school fired her. She then filed a case with the Equal Employment Opportunity Commission, charging that she was fired for threatening to sue.

The school has maintained that because Perich had the status of “called” teacher, a designation the Evangelical Lutheran Church gives those involved in religious instruction, the ADA is not applicable in her case and the EEOC has no jurisdiction. Perich taught a standard fourth-grade curriculum but also taught some religion classes and was occasionally responsible for chapel services.

Under what is known as the ministerial exception, courts have said that religious organizations may choose their religious leaders without being subject to lawsuits. Perich’s claim raises the issue of whether the ministerial exception applies to teachers at religious schools whose primary responsibilities are not faith-related. It also brings up the question of whether courts get to have a role in determining what is and isn’t a faith-related position.

Perich’s claim was rejected by a Michigan District Court but upheld by the 6th U.S. Circuit Court of Appeals.

Dozens of religious and civil rights organizations have weighed in with amicus, or friend-of-the-court, briefs on either side of the case.

Among those, the U.S. Conference of Catholic Bishops, in a joint brief with the Church of Jesus Christ of Latter-day Saints, the presiding bishop of the Episcopal Church and the Union of Orthodox Jewish Congregations of America, argued that in a dispute over who serves in ministry, “there is no occasion – no justification whatsoever – for the state to become involved.”

“Church members who seek to serve the church in ministry may invoke whatever procedure is provided by the church to challenge their exclusion,” the brief said. “But they cannot seek redress in the civil courts – because they have consented, at least implicitly, to church governance, and because the state has no authority to interfere with the church’s choice of its ministers.”

But another amicus brief argues that protecting religious rights also means preventing the use of the ministerial exception in cases where an employer’s actions are unrelated to religious beliefs or doctrine, but may be a pretext for justifying firing someone for other reasons.

“The exception should not prevent courts from assessing whether the employer’s asserted religious motivation for that conduct was pretextual,” said the brief filed by Americans United for Separation of Church and State, the American Civil Liberties Union, ACLU of Michigan, National Council of Jewish Women, Sikh Council on Religion and Education, and the Unitarian Universalist Association. “Such an inquiry would not … entangle courts in disputes about church doctrine. The pretext inquiry is familiar to American courts, and in most cases requires no analysis of religious doctrine.”

At a Supreme Court preview discussion at the Georgetown University law school Sept. 19, Professor Michael Gottesman said “there are so many possible directions this could go it is absolutely impossible to predict even within a country mile where it could go.”

Professor Nina Pillard said she could see the court ruling in such a way as to avoid defining where exactly the line lies for ministerial exceptions. “The court can’t go in and decide what ‘minister’ means.”

Georgetown’s panelists said there are several possible scenarios that could play out for how the federal Patient Protection and Affordable Care Act, passed by Congress last year, might reach the Supreme Court.

Visiting professor Irv Gornstein, director of the school’s Supreme Court Institute, said it’s possible the high court might not face the health care law until 2014, because lower courts have been throwing out legal challenges brought by states, saying they lack the standing to sue.

The court also has on its docket so far two cases about when legal immigrants may be deported for breaking laws. Additional cases which the court is being asked to take raise legal questions about when immigrants may be placed in deportation proceedings for having committed minor crimes which were retroactively classified as deportable offenses. There has been disagreement among lower courts about these types of cases.

Yet another immigration-related case being considered for the calendar questions how asylum law applies to family members of those who are admitted to the United States because of fear that they would be persecuted in their homelands.

Also likely to be brought to the high court is Arizona’s immigration enforcement law.

Parts of Arizona’s law known as S.B. 1070 have been blocked from being enacted as courts have considered whether the provisions overstep state authority by delving into immigration, which is an area of federal jurisdiction.

Challenges to a Utah practice of allowing roadside crosses commemorating deceased highway patrol officers also are up for consideration by the court.