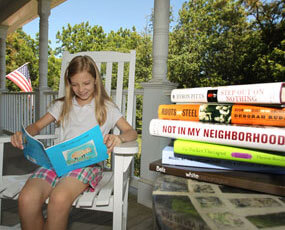 Rebekah Balick wanted to tell a story to her sister, Katerina.

“My sister was learning to read and I just decided to write a little story for her,” Rebekah said.

The 10-year-old parishioner of St. Louis in Clarksville ended up writing a book for the world to read. Inspired by biblical passages, “The Little Lost Lamb” (lulu.com) follows a somewhat naughty lamb named Snowy that leaves home and learns valuable lessons along the way.

Rebekah also did the artwork, saying, “I had to get the pictures right and make sure they didn’t look funky.”

She was encouraged by her father, Glenn. It was an exciting day when her book hit the shelves at the Howard County library.

Rebekah’s is one of several recent book releases that have a link to the Archdiocese of Baltimore.

Surviving life day-to-day can be a challenge. Borchard has provided a veritable Cliffs Notes version of how to handle the latest hurdle, as she assembles lessons learned from nearly everyone in her life. Advice is found on every page, using her trademark wit and knowledge.

Borchard, 39 and the mother of two, is a parishioner of St. Mary in Annapolis and a Catholic News Service columnist whose work regularly appears in The Catholic Review. She also has a popular blog on Beliefnet.com called “Beyond Blue.”

Capuchin Franciscan Father Burkey was born and raised in Cumberland, so he was a natural to write a book subtitled “The Life & Labors of Blessed Francis Xavier Seelos in Maryland’s Allegheny Mountains, 1857-1865.” Blessed Seelos, a Redemptorist priest who also pastored in Annapolis and Baltimore, is a candidate for canonization.

Kiwi is the titular character of a new children’s book by Fedi Hagan, a parishioner of St. Joseph of Cockeysville. Kiwi’s colorful, changing skin makes her prideful. Eventually, she learns humility.

“I wrote this book with the emphasis on teaching a positive lesson to all children,” said Fedi Hagan. She is working on a second book, which she says “will also use the teachings that I have learned through my Catholic upbringing.”

Not in My Neighborhood
By Antero Pietila
ivanrdee.com

Pietila spent much of his 35-year career at The Sun covering Baltimore City neighborhoods, politics and government, and he has produced a probing work on race subtitled “How Bigotry Shaped a Great American City.”

He explores how federal and municipal government, now-revered Jewish philanthropists, the Catholic Church and even prominent blacks maintained segregated housing in Baltimore with private covenants, predatory lending and block-busting. The result was white flight that transformed the demographics of the region.

The book does have its heroes, such as Father Joseph L. Muth, pastor of St. Matthew, Northwood.

Step Out On Nothing
By Byron Pitts
stmartins.com

A graduate of St. Katharine School in Baltimore and Archbishop Curley High School, Pitts has earned acclaim reporting from Afghanistan and Haiti as a correspondent for CBS News.

That climb did not come easy, as Pitts grew up the city suffering from a severe stutter. Essentially, he was functionally illiterate when he entered Catholic schools. A non-Catholic, he has become a vocal supporter of Catholic education in the city.

Released in 2009 and subtitled “How Faith and Family Helped Me Conquer Life’s Challenges,” the book is slated for a soft cover fall release.

Music at the Crossroads
Edited by Mark Osteen and Frank J. Graziano
apprenticehouse.com

Apprentice House, a nonprofit arm of the communication department of Loyola University Maryland, is the nation’s only campus-based, student-staffed book publishing company.

Subtitled “Lives & Legacies of Baltimore Jazz,” the book teams students and seasoned professionals. Osteen is a professor of English, Graziano a member of the Class of 2010. They edited profiles from well-known music critics, such as Geoffrey Himes, to recent graduates such as Erin Bowman. Her examination of Billie Holliday touches on her time at a home for troubled girls, which continues as a mission of the Sisters of the Good Shepherd.

Apprentice House has also published “White Asparagus” by D.R. Belz, its first-ever anthology of essays, poetry and fiction by a single author. Belz was a 1978 graduate of the college.

Before she graduated from Catholic High and Loyola, Rudacille grew up in Dundalk and went to Our Lady of Hope School at a time when most neighbors relied on a paycheck from the Bethlehem Steel mill in Sparrows Point.

Subtitled “Boom and Bust in an American Mill Town,” her book narrates the rise and fall of the mill, from its founding in the late 19th century; to the late 1950s, when 40,000 employees made it the world’s largest steel mill; to today, when globalization and an economic downturn have made it a veritable ghost town.