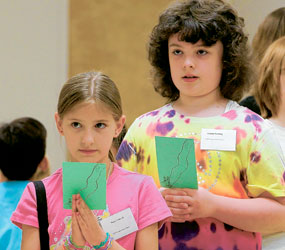 Many children eagerly anticipate the start of summer bible school in their respective parishes. Rebecca Melhemage, 9, is no different.

“I think the fun part of being here is taking time out of the summer to come see our friends and learn about God,” said Rebecca, a parishioner of Sacred Heart of Mary in Graceland Park.

Knowing the excitement for the parish’s summer sessions, Xaverian Brother William Ciganek is always looking for a way to keep things fresh.

The school’s director boldly picked the theme “Is God Calling You To A Life of Service?” which included vocational lessons for the five-day camp, which ran from July 12-16.

Brother William saw dividends July 13, when Deacon Doug Kendzierski asked questions of the 58 students and the children used their knowledge of deacons they had acquired the previous day.

Brother William grew up in Sacred Heart of Mary and recently became its pastoral associate. He has guided its popular bible school for decades. A conversation with Father George J. Gannon, the parish’s pastor, led to this year’s theme.

“With the children and the decrease of priests and religious, they don’t have a whole lot of interaction,” Brother William said. “So, I thought if we studied it (vocations) in Bible school, it would become very real to them.”

Each day began with the Pledge of Allegiance to the United States flag and a similar pledge to the Vatican, as well as a prayer for vocations. All four days featured a speaker from the religious life, such as priests, sisters, brothers and deacons. Seminarian Juan Camilo Zapata worked with students as well.

Students learned about the religious’ various vestments and attire, missions’ callings and joys.

Sister of the Holy Family of Nazareth Constance Sabalauskas told students that her life is rewarding, as she has served the church as a mentor to young sisters and as a school teacher.

Sister Constance had to listen to God’s call to her.

“When God created you, he placed within you his plan and a part of our life is figuring out the puzzle God puts in us,” she told them. “We have to figure out what that puzzle is so we can get back to God. It’s like our treasure hunt.”

Father Gerard Francik, the former director of vocations for the archdiocese, provided giveaways to Brother William for the children, as well as educational audio-visual programs.

The camp changed perceptions. Shaylyn Auffarth, 11, said she thought the life of the religious was uneventful.

“I’ve been coming to Bible school for the last couple of years and they’ve been talking about what they do,” Shaylyn said. “Now I think it’s really interesting and could be a fun job.”

Rebecca Melhemage, meanwhile, said she has a newfound respect for the religious.

“I found it interesting that the priest teaches all of us and he never gives up, even when it’s hard,” Melhemage said. “It’s the same with the sisters, brothers and the deacons.”