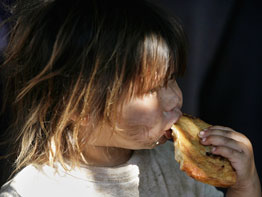 WASHINGTON – Officials from a variety of nongovernmental organizations have urged the United States to continue overseas development assistance despite the current global financial crisis.

One official at a Nov. 24 press conference in Washington said relieving hunger in poor nations could be seen as a national security issue.

At the press conference, marking the release of the 19th annual hunger report by Bread for the World, speakers noted that 100 million more people went hungry earlier this year because of fuel and food price spikes, coupled with the growing of crops for fuel rather than for food – and an additional 100 million have gone hungry since the financial crisis started in September.

“We started sensing that something was seriously wrong” a little over a year ago, said Ken Hackett, head of Catholic Relief Services, the U.S. bishops’ overseas relief and development agency.

Another sign came during his visit to CRS workers in Haiti.

“When you stand up before 200 of your workers in Haiti, and you give your speech and you thank them for all the good work that they’re doing, and the first hand that goes up says, ‘When are we going to get a salary adjustment?’ you know something’s wrong,” Mr. Hackett said. “It’s even affecting our own people on the ground.”

Concern for the poor and the vulnerable “must be at the foundation of any assistance,” he added. Overseas development assistance, as currently constituted, “is not responsive in any way to the needs of the poor,” according to Hackett.

A chart distributed at the press conference showed 50 foreign assistance objectives, 51 U.S. governmental foreign assistance organizations – Cabinet departments among them – and 48 presidential initiatives, pieces of legislation and strategy papers. McPherson called for an overhaul of the bureaucracy; the Obama transition team has been approached with the idea of a Cabinet-level Department of Global Assistance.

“There’s nothing like money to dictate where the control is,” Mr. McPherson said.

Foreign assistance “is not addressing the root causes of poverty,” Hackett said. It must integrate food aid and development aid, he added. “It’s imperative that the United States supply, even in tough times, adequate assistance.

The U.S. role in development aid has slipped over the past 20 years “because we’re now into immediate emergency relief,” Mr. McPherson said.

Joy Phumaphi, the World Bank’s vice president for human development, said the World Bank was prepared to give $6 billion in farm aid to developing countries, but added that the figure was 10 percent of what was needed worldwide.

The executive summary of the Bread for the World hunger report showed the inequality of aid and trade.

Catholic co-sponsors of the Bread for the World hunger report included the Bon Secours Health System; Catholic Charities USA; the Catholic Health Association; SC Ministry Foundation, which is an agency of the Sisters of Charity of Cincinnati; and the Sisters of St. Joseph of Orange, Calif.

The full report can be seen at www.hungerreport.org.