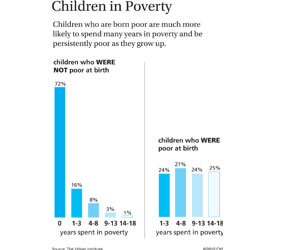 WASHINGTON – A study released by the Urban Institute shows that 49 percent of children who are poor at birth go on to spend at least half of their childhoods living in poverty, but Lisa Sheehan of St. Ann’s Infant and Maternity Home in Hyattsville said that helping young, single mothers can help turn that around.

The Urban Institute in Washington is a nonpartisan economic and social policy research organization. The study, “Childhood Poverty Persistence: Facts and Consequences,” by Caroline Ratcliffe and Signe-Mary McKernan shows that targeting poverty at birth could help the 37 percent of youths who live in poverty at some point during their childhoods.

Demographically, 31 percent of white children and 69 percent of black children who are poor at birth go on to spend at least half of their childhoods living in poverty, according to the study. It shows that all children born into poverty are more likely to remain poor as adults because of their unstable financial background.

Sheehan is director of development at St. Ann’s in suburban Washington, which provides residential care and services to abused and neglected children and to single pregnant and parenting adolescents in crisis, as well as quality day care to the children of working families.

St. Ann’s is run by the Daughters of Charity of St. Vincent de Paul, a community of women religious dedicated to serving the needy. The staff of approximately 150 employees and consultants include qualified child care workers, maternity program staff, physicians, nurses, psychologists and others.

“We try to have the girls see that there is a bigger world out there,” Sheehan told Catholic News Service. “There is a cycle which starts with these teen mothers coming from unstable backgrounds and then mothering children who are then raised in the same situation.

“We encourage the girls to complete high school and think about their future for further education or jobs in order to end the cycle and have the mothers be able to support their children and create a better life for themselves,” she added.
The circumstances of children born into poverty and their families also is a concern for the Department of Justice, Peace and Human Development of the U.S. Conference of Catholic Bishops.
Susan Sullivan, the department’s associate director of education and outreach, and directors Kathy Saile, of the Office of Domestic Social Development, and Ralph McCloud, of the Catholic Campaign for Human Development, spoke with CNS about the implications of the new study and their efforts to end child and adult poverty.
“We need to confront the systems in place to make sure they are helping the poor,” McCloud said.
“Communities need to address the root causes,” he said, which is a main goal of CCHD while helping the poor help themselves.
The bishops’ domestic anti-poverty program, CCHD is one of the largest private funders of self-help programs for poor people in the United States.
McCloud said that children who are born into poverty often have to overcome physical problems that are side effects of limited finances, as they often are not provided with adequate nutrition and are only treated for serious illnesses – which also affects their ability to learn at school.
“I think this study is accurate,” McCloud said, “because children born into poverty often remain in the cycle of poverty, and as young adults they are financially behind and often never catch up.”
The state of the nation’s economy hits the poor especially hard, according to McCloud. The number of unemployed people is at 14.6 million, and the unemployment rate is 9.5 percent, according to a federal summary released in June 2010. He said the country’s slow recovery from recession affects poor adults because jobs they’d qualify for are now being taken by people with higher education and more experience because of the lack of jobs in their own fields.
Saile said that children growing up in poverty have to overcome both physical and emotional obstacles.
Although good education is important, Saile said there is “no single bullet to end poverty,” because “nutrition, housing and family structure are important factors also.”
“The poor can’t afford to make mistakes, because they often have to pay for them for the rest of their lives,” Saile said, explaining that there is a ripple effect, where every decision and problem the poor face affects multiple areas of their lives.
Sullivan explained that “options and resources” are limited for the poor people, many of whom spend long hours at work when they do have a job and have a long commute via public transportation.
She said the church has to address short-term needs for things such as clothes and food, but also focus on the systematic causes of poverty and work on ending them.
For the church community, “Catholics need to be the good Samaritan,” Sullivan said, “as the Gospel calls on us to be concerned for families and individuals who are struggling.”