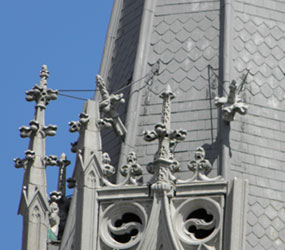 St. Patrick Church in Fells Point has been deemed unsafe for use after sustaining major damage during the 5.9 magnitude earthquake felt in Baltimore Aug. 23.

According to an archdiocesan press release, the historic church’s steeple and bell tower were badly damaged. The church has been closed indefinitely.

“Archbishop Edwin O’Brien, Archbishop of Baltimore, has offered his prayers for the parishioners of St. Patrick’s,” according to an Aug. 23 archdiocesan statement, “and assures them of his pastoral care and support.”

St. Patrick was founded in 1792 and the current church was completed in 1898. It is owned by the Archdiocese of Baltimore. Redemptorist Father Robert Wojtek, pastor of Sacred Heart of Jesus, oversees its operation.

Sacred Heart’s Mass schedule and a list of other Catholic churches in the area can be found at www.archbalt.org.