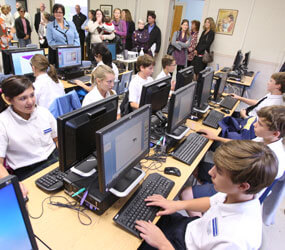 Steve Brady stood in front of St. John the Evangelist School in Hydes Oct. 18 and saw hundreds of friends that pulled him out of unbearable emotional and physical pain.

Brady hadn’t even spoken a word to the hundreds of students, staff and families gathered, but some wiped away tears.

“It’s hard to believe next month will mark two years,” he told. “It’s difficult to understand that because it’s been a long road.”

Steve was in and out of consciousness at Maryland Shock Trauma in the week that followed. Family and friends would tell him of his tragic losses, but the news didn’t sink in until he was fully awake. The grief was overwhelming, but motivating.

“My earliest memory is, “I know what I’ve been dealt, I can’t help but feel lucky and I still have Ian,’ ” Steve said. “From the beginning, I said, ‘I’m lucky.’”

The kindness of people, particularly from St. John the Evangelist, emerged quickly after accident.

“I was still unconscious in Shock Trauma and people I didn’t know were sending in money,” Steve Brady said. “I was getting cards and visitors and people I’d never even met would come up to my door and bring a meal or something. People were sending in money. We felt we needed to give back to the people who raised us up and do something positive in my wife and son’s name that is ultimately going to benefit people.”

Principal Jean Delcher said the foundation’s donation was $20,000. That’s in addition to the school’s $30,000 Race for Education technology fundraiser. Smart boards are also located in many classrooms there.

Wil’s cousin, seventh-grader Jeffrey Brady, marveled at the new additions to the school.

“It means a lot because if he were here to today, he would be so happy that we have this technology center,” said Jeffrey, 12. “It also stirs up a lot of emotions because he’s not here to enjoy it with us.”

“Wil was just such a phenomenal kid,” Kelly said. “I said I knew he would make his mark on this school, but I didn’t think it would be like this.”

Kelly said her daughter “lived for her children” and was the type of mother who recognized the importance of family.

On the day of the blessing, Kelly said “I feel her presence here perhaps more than any place else.”