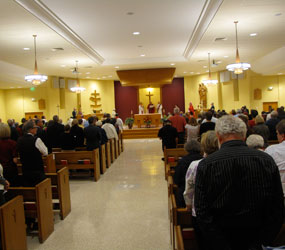 It was a temporary building that lacked – for some people – the appearance of a church. That’s all changed.

Forty-one years to the day the church was dedicated, massive renovations to the church’s floor, ceiling, windows and wall coverings were blessed and dedicated by Auxiliary Bishop Denis J. Madden, who praised parishioners for their patience and generosity.

“Just look around you,” Bishop Madden said. “It’s magnificent. You have to love it. It’s wonderful. I know that you will be equally generous in sharing the Gospel message with all you meet along the way. Perhaps, by the grace of God, others too will return with you to this beautiful church to worship in this sacred space.”

In order to do the renovations, the parish has raised $1.1 million of its $1.5 million capital campaign. The campaign will also seek to renovate the parish hall, which is below the church and served as its temporary replacement during renovations.

Drawing laughs, Father Hammond told parishioners at the Mass’ conclusion, “Without your support, your enthusiasm, without your money obviously, too, it wouldn’t have happened. God is well pleased with you.”

Some called the previous incarnation of the church dull, but its new bright appearance was viewed as welcome.

“It was pretty much a total facelift to be honest with you,” Father Hammond told The Catholic Review. “It’s brought a lot of spirit, pride and renewed energy.”

The logistics of such an undertaking were initially intimidating for parish leaders, who had to address renovation concepts, fundraising and Mass locations amongst many other questions.

“We were so nervous as a parish council,” said its president, Tom Dauses. “I thought people adapted really well. They kind of embraced it. We were having Masses over in our small chapel and it was a little tighter, but it was wonderful.”

Parishioners moved back into the church Sept. 10 and 11 and the changes have paid dividends.

“The old church was working against us,” said music director Kate Scott said. “The acoustics were really dead before, so you were really fighting to get the music to travel. Now, there’s been a huge jump in congregational singing. You can really hear them. It’s a huge pleasure to sing in there. I did not expect it to change as much it did.”

“Forty years ago, this was built as a temporary building and they would worry about building a church later,” Balog said. “This is our chance to ‘churchify’ and enhance our worship space. That’s why this is so important.”