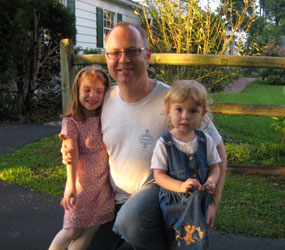 Rybczynski (nee Kline), 32, is prone to infections as she recovers from a bone marrow transplant which came after a leukemia struggle.

In light of H1N1 flu concerns, Baltimore’s Johns Hopkins Hospital has kept children away from some buildings, including the one where Rybczynski is currently residing. She talks to Eleanore, 5, and Cecilia, 2, on the phone.

“I hear regularly that they miss her,” Julie’s husband, Dave, said of his daughters. “I have to keep reassuring them that she’s getting better and going to come home.”

Since Julie was diagnosed in October of 2008, there have numerous struggles for the Rybczynskis.

“It’s hard to describe what it feels like to have endured the last year,” said Dave, a musician and teacher at Howard Community College.

Before she was diagnosed, Julie was the Archdiocese of Baltimore’s coordinator of the church leadership institute.

“Julie was so happy, she was walking on air,” Dave said of her job.

After a brief time at the Catholic Center, doctors diagnosed her with acute myeloid leukemia.

Her insurance is through the archdiocese, but there have been many co-pays after various procedures and surgeries, putting financial constraints on the family. Eleanore attends the 4-year-old class at St. Francis of Assisi School in Baltimore.

Their home parish, St. Francis of Assisi, will be the site of a benefit dinner for the couple Dec. 6. The sold-out event will have 280 attendees from the parish and around the archdiocese. It will feature music and dance.

Support has come from classmates and faculty at College of Notre Dame of Maryland, where she graduated in 1999. Friends, family and even strangers have contributed to a fund.

Ruth Puls, director of the archdiocese’s ministry formation and development division, has known Julie since she was in high school and later hired her.

“Every day, when Julie would come in, she would just light up the place,” Puls said.

Mary Pat Seurkamp, Notre Dame’s president, has known Julie since her days as a student.

“Every class has students who distinguish themselves in very special ways and Julie was one of those students,” Seurkamp said. “She was a scholar, very academically focused and also greatly involved.”

Julie once was pastoral associate for St. Clare, Essex, and a teacher at St. Joseph School in Fullerton. She also has a master’s degree from the Ecumenical Institute of Theology at St. Mary’s Seminary and University.

“It brought tears to many and it ended with a standing ovation for Dave,” said Mary Beth Lennon, one of Julie’s longtime friends.

Dave and Julie met when she was participating in the music ministries at St. Casimir, Canton, along with one of Dave’s brothers.

Their first interaction, during a rehearsal, was uneventful. They met again weeks later and he discovered she loved the theater.

“She’s an excellent conversationalist,” Dave said. “She lets you know what she’s thinking. I always loved that about her.”

By 2002, they were married and their family began to grow.

It’s a family that Dave knows is missing a crucial member at home. Faith is getting everyone through adversity.

“I do not know where we would be without it,” Dave said. “I’m confident that when we get to the other side, we’re just going to pick up right where left off.”