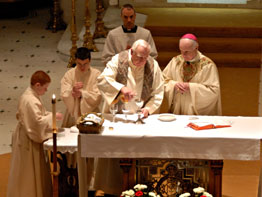 The Mass in the 112-year-old church brought to a close a yearlong celebration in honor of St. Elizabeth – a widowed princess who dedicated her life to the poor and died before her 24th birthday.

“What a patron saint to have,” Archbishop O’Brien told the parishioners during his homily. “She reflected the goodness of God… for the poor.”

Born a daughter of King Andrew II of Hungary in 1207, St. Elizabeth married German-Nobleman Louis of Thuringia at the age of 14 and bore him three children before he died in the Crusades seven years into the marriage.

“During those years she gave him conniptions,” Archbishop O’Brien said. “When he would be away, she would give many of their belongings to the poor.”

After her husband’s death, St. Elizabeth developed a great affection for the poor. In 1228 she joined the Third Order of St. Francis, establishing a hospital in honor of the saint.
It is believed her strength was weakened as a result of her vigorous work for the underprivileged, and she died in 1231. Four years later she was canonized by Pope Gregory IX.

“She was born into a very privileged existence, but devoted her life to the needs of the poorest of the poor,” Archbishop O’Brien said. “God has chosen people like her to put beside us to be an example of God’s goodness.”

Her model can be seen flourishing in groups from the Highlandtown parish – like the Knights of Columbus, the St. Elizabeth Sodality and those who run the food pantry, he said.

“In these ways, you are working through her so others can see the hope that is ours,” Archbishop O’Brien said. “This fulfills Christ’s wish that we love others as he loves us. So, it’s a wonderful feast day.”

After Mass, the congregation followed its pastor, Father Robert Sisk, T.O.R., and visiting Franciscan Friars outdoors to a marble monument inscribed with the Ten Commandments. Archbishop O’Brien then blessed the symbol of God’s mandates.
“Archbishop O’Brien has been with us only a short while, and for him to join us in this celebration demonstrates the significance of St. Elizabeth of Hungary as a saint and of a parish that has been around for more than 100 years,” said Jeremy Joseph, 29, of Mount Vernon, who serves as president of the parish council. “His presence has added a real focus and vitality to our parish. It’s exciting to have someone of such stature celebrate this with us, as you can see by the crowd.”