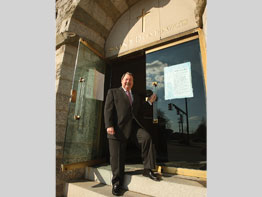 It’s enough to make you wonder how St. Dominic, Hamilton, would get by without John Matheny.

For years, he has been a go-to guy for the parish. Matheny has helped erase a deficit, played a key role in moving Masses to a lower-level church to save on utility bills and worked with the archdiocese, developers and community groups on the impending sale of two former school buildings slated to become senior apartments.

At 69, Mr. Matheny, shows no sign of slowing in his volunteer roles at St. Dominic.

And as a volunteer at the parish, he quipped, “At St. Dominic’s, once you’re on, you don’t get off.”

Talk like that around Mr. Matheny, Father Kiesel said, and he’ll deflect the praise.

“He’s a man of humility, knowing who he is in the sight of God,” the priest said, calling Mr. Matheny a “very saintly man.”

As chair of the finance committee, Mr. Matheny, a retired salesman, helped the parish get back into the black last year, posting its first surplus after several years’ deficits.

One cost-saving measure was moving all Masses except for weddings, baptisms, funerals and Christmas and Easter season liturgies to the downstairs church. With the number of parishioners attending Mass on weekend at around 350, the more intimate space not only saved money, but also brought worshippers closer to one another.

The 1958 graduate of Mount St. Joseph High School also has played a key role in helping guide the sale of the two buildings that had housed the St. Dominic school before its closing in 2005. The sale is expected to be completed in 2009; 30 apartments for seniors are planned.

Mr. Matheny said fellow parishioners and his faith in God helped him and his wife, Mary, get through the deaths of two of their three sons. David was killed in an automobile accident in 1985 at 20. Christopher, who was born with a hole in his heart, died at 26 in 1989 of heart and lung failure.

Mr. Matheny recalled the words of Deacon James L. Mann Jr.: “When your faith is really challenged, that’s when it becomes deeper.”

“We have wonderful, wonderful people here,” Mr. Matheny said. “I guess it’s just something that’s in me, that I feel I must give back for things that are given to me.”

After years of decline at St. Dominic – some 2,000 used to attend weekend Masses –attendance has begun increasing.

“I’m very hopeful for the future,” Mr. Matheny said. “I think the pendulum is swinging back for us. We’re getting more diversified, and the attendance is up. I really think that St. Dominic’s will be a jewel in the crown of the archdiocese.”