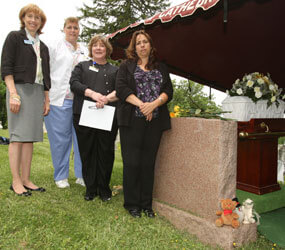 The death of a child can be the most painful aspect of parenthood.

Honoring and remembering that loss, regrettably, can become an afterthought when it occurs during pregnancy or childbirth. That is not case, however, at St. Agnes Hospital and other Catholic medical institutions with obstetric departments in the Archdiocese of Baltimore.

Twice a year, St. Agnes conducts a memorial service for babies who died in utero or shortly after delivery.

On May 7, chaplains were among the staffers behind a poignant afternoon at New Cathedral Cemetery in West Baltimore. Sherry Knowle, nurse manager of the ob/gyn department, announced the names of approximately two dozen deceased, parents placed yellow roses on a tiny communal casket and prayers were made.

“That God may grant to the parents and families of these little ones the peace of knowing that they are with Him,” was among the intercessions, capturing the essence of a service which is open to all families mourning such a loss, not just those from the Catholic faith.

“When you bury an adult, you get to go to a funeral,” said Kathi Uhland, a nurse in the birthing center at St. Agnes, where she has worked for 26 years. “When you lose a child, unless you have funds to do that … not all parents can afford a burial. Whatever the case, this allows for spiritual closure.”

The outreach began in the 1980s, when the Daughters of Charity, the order that in 1823 opened the hospital that would become St. Agnes, helped arrange for the donation of a plot at New Cathedral, south of Edmondson Avenue.

The cemetery donates the labor of its workers. The casket is courtesy of Wilbert & Monarch Burial Vaults, and the family-owned Ambrose Funeral Homes prepares the remains it receives from St. Agnes.

That aspect is vital, according to Jan McDonnell, a St. Agnes staff chaplain and parishioner of Sacred Heart in Glyndon.

“At most hospitals,” she explained, “fetal remains are treated like a surgical specimen and medical waste. At St. Agnes, they are not. We are committed to treating all babies as persons, regardless of their age.”

The credo is the same at St. Joseph Medical Center, where Susanne DeCrane, vice president of Mission Integration, directs services twice a year at Holy Redeemer Cemetery, west of the intersection of Belair and Moravia Roads. The cemetery and Ruck Funeral Homes support the hospital in the mission.

“We emphasize the Catholic belief that it’s a human person from conception,” DeCrane says. “Anything identified as fetal tissue is captured and buried. You lose a baby in the first month, it’s still a person.”

St. Joseph memorialized 15 children in April and will hold another service in September.

“Even if the family doesn’t attend,” DeCrane says, “the baby is still remembered. If they (parents) get to a place in their lives where they want to visit, the baby is there. It’s important for families to have a place to remember. It gives parents comfort.”

Parents and families linger after services, which sometimes come months after they have lost a child. On May 7 at New Redeemer, their support included Dr. Raymond Cox, chair of ob/gyn at St. Agnes, and Bea Flynn, a former nurse at the hospital who helped launch the concept.

“I just happened by, I’m here for another funeral,” said Flynn, a nurse psychotherapist in private practice and parishioner of Our Lady of Good Counsel in the Catholic Community of South Baltimore.

She nodded toward the communal headstone St. Agnes nurses selected years ago. Some parents had left teddy bears with a teardrop sewn on, another memento provided them by the hospital’s nurses.

“Every time I’m here for a funeral,” Flynn said, “I stop by. This is in my heart. It’s a wonderful tribute.”