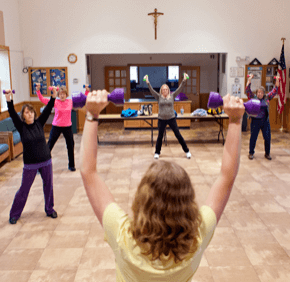 By Jessica Marsala
jmarsala@CatholicReview.org
In Frederick, 47-year-old Joanne Krantz leads an exercise class that does pilates, push-ups, squats, lunges. In Woodstock, Christina Landsman, 29, teaches yoga.
But you won’t find them at a local gym or park. Instead, the women and their students are working on their physical fitness at a place that may offer some extra spiritual motivation – church.
Landsman, a parishioner of St. Alphonsus Rodriguez in Woodstock who has been practicing yoga for seven years, introduced free weekly classes to her Woodstock parish two years ago in order to complete the community service requirement of her yoga certification.
But after she had taught the requisite eight classes, she didn’t want to stop.
The best part about teaching yoga at the parish is “feeling that you can actually make a difference in people’s lives … to hear people say how good they feel when they are done,” she said.
Margaret-Ann Radford-Wedemeyer, who has practiced yoga for 20 years and been teaching the discipline at her Emmitsburg parish for 10 years, said a church base offers a conducive setting for people who might be afraid to exercise in front of others.
“Some of the strangeness will be taken away,” said Radford-Wedemeyer of the familiarity parishioners feel at their church.
Landsman similarly described her church as a “nonjudgmental forum.”
“Fear is one of the common aspects why people don’t join a gym,” said Landsman, a part-time Merritt and Brick Bodies Clubs instructor.
Parishioner Dennis Dworkowski, 63, a graduate software engineering adjunct instructor at Loyola University Maryland in Baltimore, joined Landsman’s class in October 2013 in order to strengthen his body, which had been weakened from stage 4 colon cancer and 18 months of chemotherapy.
One of the few participating males, Dworkowski likened the class camaraderie to one of his support groups, which “opened their arms and hearts” to him.
“I call them my cheerleaders,” Dworkowski said, acknowledging how the class made “special allowances” for him in his weakened state. “It (also) helped me increase my stamina (and) concentrate a little bit more.”
In addition to leading groups at her Emmitsburg parish, Radford-Wedemeyer also teaches free yoga classes at Goucher College in Baltimore, where she is vice president for development and alumnae affairs.
“People talk about how they have been changed, that they feel different, think differently,” said Radford-Wedemeyer of the physical, psychological and spiritual changes, reported by her students, such as being more connected with their bodies or finally being able to touch their toes, “Seeing the smiles on people’s faces, I can tell that they have had a very positive experience.”
Student Carol Robertson said she uses Radford-Wedemeyer’s class to clean out the “cobwebs” in her head.
“It’s my special time for an hour when I’m away from everything else,” said Robertson, who worships at Our Lady of Mount Carmel in Emmitsburg.
To the south in Frederick County, at St. Peter in Libertytown, Krantz leads an exercise group that parish nurse Marybeth Terrell started in September 2012. While the room they meet in doesn’t have a treadmill or any resistance machines, participants, ranging in age from 64 to 78 and most of whom “only exercise in class,” accomplish much.
“I stress something different every session,” said Krantz, 47, whose background includes studying to be a physical therapist. “We work the core, arms, legs. We focus on exercise that can help you in your day-to-day life.”
Paul McMullen contributed to this article.
Related articles:
All in stride: New All Saints parishioner was one of world’s top marathoners
Ain’t no mountain high enough: NDP teacher, coach reaches beyond his comfort zone, inspires others
Also see:
Pope cuts meetings because of cold, need to rest before Holy Land trip
PrevNext