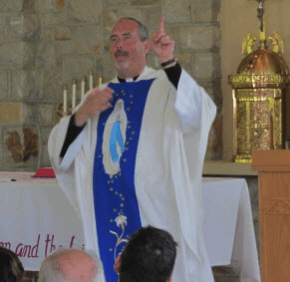 Father Mike Depcik
EMMITSBURG – The Archdiocese of Baltimore’s inaugural pilgrimage for people who are deaf May 17 was a rare opportunity for more than 80 Catholics who are deaf and partially deaf to learn more about their faith and to more actively participate in Mass.
Father Michael Depcik of the Oblates of St. Francis de Sales and the Archdiocese of Detroit, one of the few Catholic priests in the United States who is deaf, led the pilgrims to the National Shrine of Saint Elizabeth Ann Seton and then the National Shrine Grotto of Our Lady of Lourdes, both of which are in Emmitsburg.
The pilgrimage included contingents from the deaf apostolates in Washington, D.C., New Jersey and Philadelphia.
“We tend to open it up to other dioceses because our numbers are smaller,” said Eileen Finn, the director of deaf ministry in the Archdiocese of Baltimore, which coordinated the pilgrimage.
Immaculate Heart of Mary Sister Kathleen Schipani, an administrator in the department for pastoral care for persons with disabilities in the Archdiocese of Philadelphia, voice interpreted for the priest, who has been leading deaf pilgrimages in the United States and Medjugorje in Bosnia-Herzegovina since the early 2000s.
Father Depcik described a pilgrimage as the chance to do more than just “drive past” beautiful churches.
“If you stop to go inside, they (pilgrims) can be inspired by the beauty,” said Father Depcik. “You don’t really necessarily have to go to Lourdes. Right here in our own United States, there is beautiful Catholic history to visit.”
Father Depcik also suggested that pilgrimages give the deaf the opportunity to play catch-up with their faith.
“Many deaf grew up strong Catholics, but they missed a lot of information about their faith that hearing people take for granted,” said Father Depcik.
He gave as an example those who discovered on the pilgrimage that St. Elizabeth Ann Seton was the first American-born saint. Chris McQuaid, who worships at St. Ignatius in Ijamsville and was able to vocally respond to the Catholic Review’s questions, said that learning about the saint while on the pilgrimage “humbled” him.
“Compared to their lives,” McQuaid said, “we really haven’t felt the breadth of what suffering is.”
For many, the best part of the pilgrimage was the chance to celebrate Mass with a priest whose first language is American Sign Language.

Jerrod Grill, a senior at the Maryland School for the Deaf and parishioner of St. Mark, Catonsville, uses American Sign Language to interpret one of the readings during Mass at the National Shrine Grotto of Our Lady of Lourdes in Emmitsburg May 17. (CR Staff | Jessica Marsala)

Jerrod Grill, a senior at the Maryland School for the Deaf who will enter Gallaudet University in Washington, D.C., in the fall, attended the pilgrimage with his mother. He said that his family used to attend Father Depcik’s Masses when the priest lived in Frederick.
“He’s (Depcik) such a good priest,” Grill said. “I love his homilies. He’s a very inspiring deaf priest.”
With Father Depcik now in Michigan, Grill said that he and his family returned to their home parish of St. Mark in Catonsville. Without the benefit of an interpreter there, Grill says he focuses on the Mass readings.
Cisco Vigil, who does some interpreting work within the Archdiocese, voice interpreted for Grill.
Father Depcik explained that American Sign Language has a different grammar and structure than that of English. In interpreting it, much can get lost in translation, and he compared those in the deaf community without access to a priest who signs to a flock of “sheep without a shepherd.”
“Some people say, ‘Oh just having an interpreter is like equal,’ but it’s not exactly equal,” Father Depcik said. “To have Mass in ASL, the people are more involved: They are not passive.”
Related articles:
NDP swimmer earns bronze in London Paralympics
Bishop Malooly confirms nine deaf teens
DVD details how to minister to parishioners who are deaf
Also see:
‘The quintessential Don’: Longtime Loyola Blakefield dean transitions to new role
Some pass on gym, get exercise at church
PrevNext
1 Response

Jessica Marsala is a freelance writer for the Catholic Review.