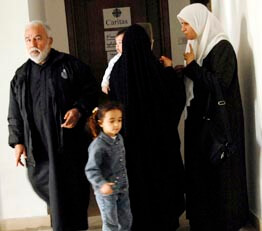 AMMAN, Jordan – Seen as allies of the West, Christians and their institutions have become targets of extremist Islamic groups in Iraq, say Iraqi Christians.

“Christians are facing a big problem in Iraq. Maybe all Iraqis are facing big problems, but I am talking about the Christians now,” said Ra’ed Bahou, the Pontifical Mission for Palestine’s regional director for Jordan and Iraq.

Saddam Hussein’s regime – no matter how cruel and despotic – kept the lid on any sectarian violence, said one Iraqi Catholic refugee in Jordan, who asked that his name not be used. He said Saddam, a secular leader, was especially good for Christians, as long as they stayed out of the way.

“Saddam (controlled) everything. Nobody could say anything bad especially (about) us Christians,” he said. “Christians in the Middle East are very good people. We are peace-loving people.”

Another refugee said that after years of living in fear and daily bombings many Iraqi Christians felt they were actually safer with Saddam.

“We are getting tired. When Saddam was in power there was no fighting. Saddam loved the Christians. We were safer with Saddam; now we just leave the country,” he said.

Christians make up about 5 percent of the 1.5 million Iraqi refugees in Jordan, said Bahou, whose agency is under the auspices of the New York-based Catholic Near East Welfare Association.

Most of the Christians in Iraq were part of the middle class and had a relatively good standard of living before the war, Mr. Bahou said. Like most Christians in the Middle East, they devoted a lot of their time to their children and their education.

At least six Iraqi priests have been kidnapped and five Christian churches bombed in the past few years. At first the Islamic extremists targeted mainly Christians, but now they have turned against each other, said one relief official who works with the Iraqi refugees.

“In the end there will be no Iraq,” she said.

Mr. Bahou said he was “not optimistic about what is going on demographically.”

“Before there used to be 1 million Christians in Iraq; now there are only half a million left. Everything is changing, and it will never be like it was before,” he said.

With only one Chaldean Catholic priest attending to the pastoral needs of the Chaldean refugees in Amman, many Iraqi Catholic refugees have had to find their place within the churches of different rites. Jordanian churches have never been so full, said Mr. Bahou, and worshippers must come early to find a seat at Sunday Mass.

Through the Franciscan Sisters of Mary, the Pontifical Mission in Jordan has sponsored a catechism training program for Iraqi religious educators who have remained in Iraq. For at least three years, workshops were held four times a year, twice in Jordan and twice in Iraq, in coordination with Chaldean Archbishop Louis Sako of Kirkuk. Religious experts from Lebanon also take part in the meetings, said Mr. Bahou.

“Last year we held the two workshops in Amman but we were not able to hold it in Iraq because of the political situation,” Mr. Bahou said.
Nevertheless, he said, “outside contact is very important” for the Christian religious community in Iraq.

In addition, with so many Iraqis now living in Jordan, keeping the lines of communication open with their religious and spiritual leadership in Iraq becomes very important, Mr. Bahou said.