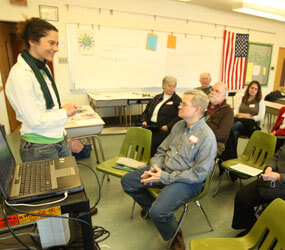 Dorothy McCutheon is always interested in finding ways to expand health care to the poor and increasing education to Baltimore’s children.

The parishioner of St. Cecilia, Baltimore, came to the 31st annual Archdiocesan Social Ministry Convocation at Seton Keough High School in Baltimore March 6 with an open mind. She is a yearly attendee and always finds something new to learn.

“Really you get the feel of the needs of people and you see the stressing of hope,” McCutheon said.

Archbishop Edwin F. O’Brien said the theme is “coming more and more to the fore in the church leadership.”

He led a prayer service and told the more than 300 attendees that their work of protecting human beings and the environment is recognizing God’s gifts.

He said people often “squander” those gifts “so thoughtlessly, carelessly and selfishly.”

“I sense you are the conscience of the diocese, reminding us all of the great gifts God has given us with a generous response that his grace allows us to make” the archbishop said.

Monsignor William F. Burke, the leader of the annual convocation, said attendees are often “on the outside trying to rally the troops to different causes.”

He said when it comes to changing the patterns of poverty, “this is where the resistance starts.”

A number of people in attendance were given awards for their tireless advocacy on behalf of the poor, hungry and sick, as well as for their efforts in promoting the faith within parish ministries.

Monsignor Burke said there “are new people all the time,” who come to the convocation each year. He added that service hour requirements often open the eyes of high school students to the social justice aspect of Catholicism.

“What the pope is saying for the First World is that the challenge for conversion is not about me and my, it’s about we and ours,” she said. “It’s about love at the heart of it all and love is not an individual experience. Love is always relational. The relationship we get challenged to, that is the hardest in our First World society, is a love that embraces the civic collective. “